By Victoria Ahearn, THE CANADIAN PRESS 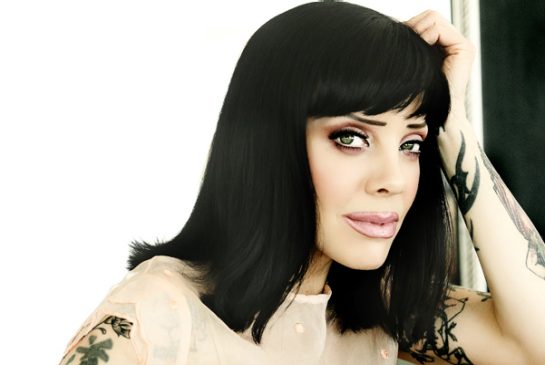 TORONTO – Bif Naked is in a hotel restaurant, chipper as ever with her jet-black hair and tattooed arms, even as she discusses the darker parts of her new memoir, “I, Bificus.”

After battling misogyny and drugs on the music scene and dealing with sexual assault and a divorce – not to mention surviving breast cancer, kidney failure and heart surgery – the Vancouver singer-songwriter is newly engaged, feeling healthy and plans to record a new “very loud” record.

“I feel really good,” says the 44-year-old, whose past hits include “Spaceman” and “I Love Myself Today.”

“Going through a divorce is an unfortunate stress, I think for everyone involved, and I wasn’t prepared to go so long. I had a sick dog at the time and it was quite a tremendous time, I have to say.

“To be on the other side of that is incredible.”

“I, Bificus” is a candid account of her life, from her upbringing in Manitoba with her adoptive family to her health scares and her career on the pop-punk scene, where she once tried heroin.

The Juno Award winner, whose real name is Beth Torbert, was born in India and put up for adoption by her teenage Canadian mother. American missionaries adopted her and moved the family a few times, eventually settling in Winnipeg.

As a kid, Torbert loved poetry, languages, acting and dance. During her teens, she had a wild side.

Torbert writes she ran away from home, hitched rides and was forced by her mother to see an addictions counsellor.

She also had a “blind trust of just about anyone,” resulting in some harrowing sexual experiences.

In the book, she says she lost her virginity in a “gang bang” at a house party. She’d had a bit of alcohol and was caught off guard when she followed a boy into a darkened room and several of his friends were waiting there.

Torbert also writes of a time a photographer coerced her into drinking a pill dissolved in water at a photo shoot. She became semi-unconscious, and when she woke up he was on top of her.

Then there was the frat boy she was dating at the University of Winnipeg who tied her to a bed, had sex with her, then left and didn’t come back until the next day.

Looking back on those experiences, she says she’s worked through them via counselling and her music.

“I think that I’m lucky that I got unscathed, ultimately,” she says. “I wasn’t killed, I wasn’t maimed, I didn’t have broken bones.”

Despite such incidents, and her divorce from sports journalist Ian Walker, Torbert remains the hopeless romantic she was in her youth.

“I’ve been engaged probably 15 times in my life,” she says. “Now it’s really interesting to be with a partner that I’ve been in a healthy relationship with for three years.

Her fiance plays guitar in her band and is nicknamed Snake. The two plan to marry in July with Torbert’s manager, Peter Karroll, walking her down the aisle.

Torbert says it was Karroll who convinced her to do the memoir, which also touches on her breast cancer battle, first announced in January 2008. During that time she also had kidney failure, and in 2012 she had surgery to close a hole in her heart.

“My heart surgery was definitely a mortality fear and it was the big crisis, and since that point things have been really easy and funny,” says Torbert, who takes a Baby Aspirin a day and eats a vegan diet.

“I think everything’s quite funny and I think I don’t take things so seriously. That could come with age anyway. I’ve turned 40 five times now.