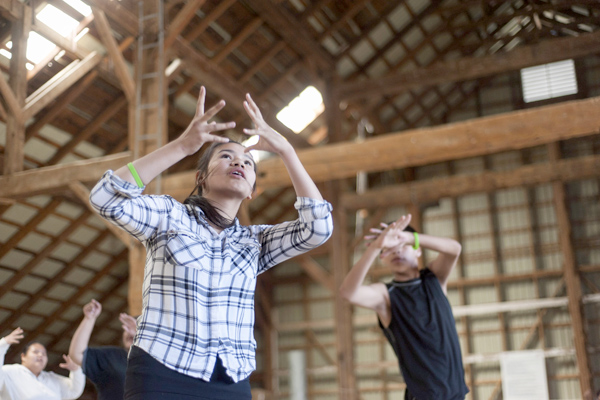 Cheyanne Flett of St. Theresa Point First Nations, Man., practices a dance for the Outside Looking In program at the Tim Horton Onondaga Farms in St. George, Ont. on Thursday, May 12, 2016. (THE CANADIAN PRESS/Hannah Yoon)

ST. GEORGE, Ont. – Keanu Monias likes to crank tunes from Justin Bieber and Michael Jackson when he’s in the mood to groove, but recently dancing has become more than a hobby. It’s part of his curriculum.

The 16-year-old attends high school in the Garden Hill First Nation in northern Manitoba, one of four communities where indigenous youth are translating dance moves into credits – an initiative yielding even greater benefits beyond the classroom.

“It really helped me focus on my life,” said Monias.

“It makes me want to do something more than dancing. I want to be able to do different things, something that would make people smile.”

Through the program Outside Looking In, professional choreographers have travelled regularly to each community over the course of the year. While there, they offer teens the chance to hone their artistic skills and enhance their overall education.

“High school dropout rates for indigenous kids are so much higher than the Canadian average,” said program founder and CEO Tracee Smith, a member of the Missanabie Cree First Nation in northern Ontario.

“Being a dancer myself, I thought we need something else that’s going to bring these kids through the doors of school every day.

“Music, dance, is very much built into our culture as indigenous people. So I thought this is something that will draw them in, get them out of their seats, get them moving and, hopefully, give them a reason to come back to school or come to school every day.”

Beyond class credits, the teens will have the chance to bolster their performance resumes when they take to the stage at the Sony Centre for the Performing Arts in Toronto on Wednesday.

Under the shelter of a towering barn at Tim Horton Onondaga Farms in southwestern Ontario, the youngsters are clad in T-shirts, sweats and sneakers devoting hours of rehearsal time to prep for their big performance.

From an artistic point of view, Smith said she doesn’t typically include a lot of traditional dance in the show. The teens mainly focus on hip-hop routines, with modern and contemporary styles also in the mix.

But this year’s closing number will feature award-winning music producer DJ Shub, who specializes in electronic powwow dance, which they will, in turn, incorporate into their performance, she noted.

Garden Hill First Nation high school teacher Swabia Allen said that while the training schedule has been gruelling for students, the dancing has paid dividends.

“I’ve noticed kids that were very shy and timid, you see them come alive when they’re performing and dancing,” said Allen.

“It’s more meaningful to come to school…. Grades are increased because they’re there on a daily basis to get the support and learn the work that’s being taught.”

Smith said she’s also heard of students speaking of improved family relationships and better behaviour at home as part of their involvement.

“It’s grown into something bigger than I thought it was going to be.”

Bradley Monias, who turns 16 on Tuesday, admitted to jitters when he first started, but has benefited from new-found skills – and an emotional boost.

“I’ve discovered I know how to dance,” he said.

“I can make friends easily and I have the confidence I’ve never had before.”