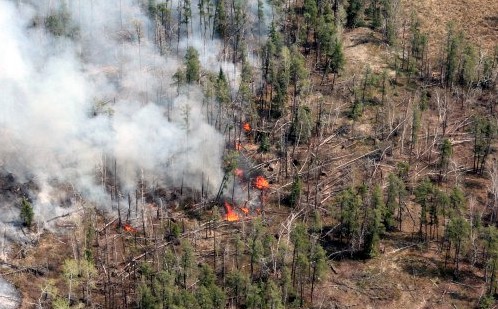 A wildfire burns near Caddy Lake, Manitoba on May 9, 2016. (PROVINCE OF MANITOBA)

WEST HAWK LAKE, Man. – Some property owners near the Manitoba-Ontario boundary who were recently forced from their homes and cottages by a wildfire are being allowed to return.

Provincial fire officials say an evacuation order for residents of Caddy and West Hawk lakes in Manitoba, and Ingolf, Ont., will be lifted Tuesday morning.

The order remains in effect for Nora, Florence and Wallace lakes, as well as the Beresford cottage subdivision in Nopiming Provincial Park.

Authorities say rain has helped crews gain the upper hand on the Caddy Lake blaze, but there has not been enough precipitation to improve the long-term fire picture and warmer weather is in the forecast.

A wildfire burning near Beresford Lake remains at 750 square kilometres, with about 60 per cent of it contained on the Manitoba side of the boundary.

Travel and burning permit restrictions in eastern, central and western Manitoba have been lifted, but local municipalities may still have their own rules.