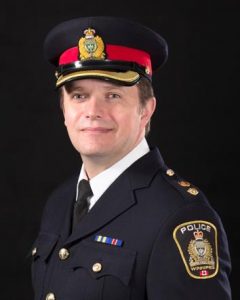 Perrier replaces Dave Thorne, who recently announced his retirement from the service after 35 years.

Perrier began his career with the WPS as a Special Constable in 1992 serving in the Forensic Services Unit. In 1994, he transitioned to uniform operations as a Police Constable.

He worked extensively as an investigator in a variety of units within the Criminal Investigations Bureau including Major Crimes, Organized Crime, Integrated Proceeds of Crime (IPOC), Commercial Crime, Special Projects and the Professional Standards Unit.