Home » Columns » A Canadian Confession from Manitoba to Ottawa

A Canadian Confession from Manitoba to Ottawa 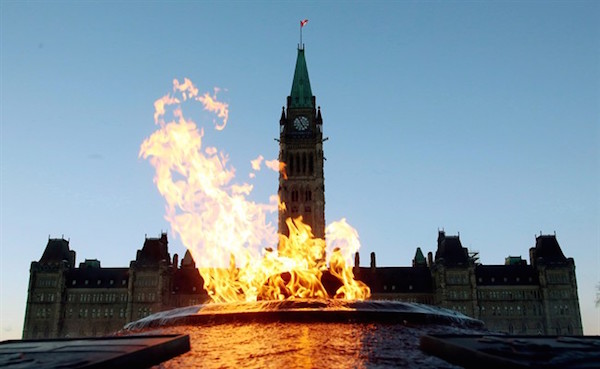 The Centre Block of the Parliament Buildings is shown through the Centennial Flame on Parliament Hill in Ottawa on Sunday, January 25, 2015. (THE CANADIAN PRESS/Fred Chartrand)

NEEPAWA, Man. — I have a confession. Despite living in Ontario for my first 13 years and making many trips to Ottawa, until last week, I had never actually been to Parliament Hill. When I found myself in Ottawa with a couple of hours to kill, I made arrangements through our constituency office to check out this iconic Canadian landmark.

I stopped by on Friday afternoon, unfortunately, neither the House of Commons nor the Senate were in session. While it would have been a great experience to see government in action, we still had plenty to see.

In April and May, tulips are a ubiquitous sight around the capital region. The tulips date back to 1943, when Dutch Princess Juliana gave birth to daughter Princess Margriet at the Ottawa Civic Hospital. The royal family were in exile following the Nazi invasion of Holland and in order for the newborn to hold only Dutch citizenship, instead of dual nationality, the hospital was temporarily declared extraterritorial by the Government of Canada. In 1945, as a show of gratitude to the country that had welcomed her and to the Canadian soldiers’ role in liberating her country, Princess Juliana sent a number of gifts, including 100,000 tulip bulbs. The gift of tulips has continued since, but this year, there are special tulips gracing the city. In honour of Canada’s 150th anniversary in 2017, the new Canada 150 tulip was unveiled earlier this month. More than 200,000 of the flowers, which have a white bloom with a red flame, can be seen across the capital region. This fall, you can buy your own.

The original Centre Block, home of the House of Commons, Senate and iconic Peace Tower was destroyed by a fire on Feb. 3, 1916. The fire claimed the lives of seven people and its cause remains a mystery. With Canada in the depths of World War I, some have speculated that it was intentionally set as an act of German sabotage. Although careless smoking and faulty wiring are equally likely.

The Centre Block was rebuilt and the building we see today was opened in 1920.

A special exhibit is currently on display in the Library of Parliament commemorating the fire. It’s an apt location, the Library is the only part of the original building still standing, as someone closed the library’s iron doors when the fire broke out. The stone corridor leading into the library is also original, but its walls, as well as the library’s door frame, bear marks of a more recent attack. This is where two years ago, Parliament Hill shooter Michael Zehaf-Bibeau was brought down by Sergeant-at-Arms of the House of Commons, Kevin Vickers, and members of an RCMP tactical team. You can see the patched bullet holes in the stonework.

All around, the hallways, foyers and alcoves bear reminders of the country’s past. Past prime ministers, past speakers and past kings and queens. The most recent addition to the Prime Ministers’ portrait gallery, Paul Martin’s portrait, was unveiled early last week.

There is also a portrait of Queen Victoria, painted in 1842, which has survived at least four fires. The painting is smaller than it was originally, as it had to be cut from its frame in order to be saved from one of the fires.

Throughout the building, there are reminders of Canada’s status as a federation of provinces. There are provincial crests on the Centennial Flame, the monument that greets visitors when they enter the grounds. There are provincial coats of arms and symbols all over the building, including in the stained glass above the Senate foyer and in the ceiling and stained glass windows of the House of Commons.

About 355,000 visitors come each year to see the Centre Block and this year, I can proudly say that I was one of them.