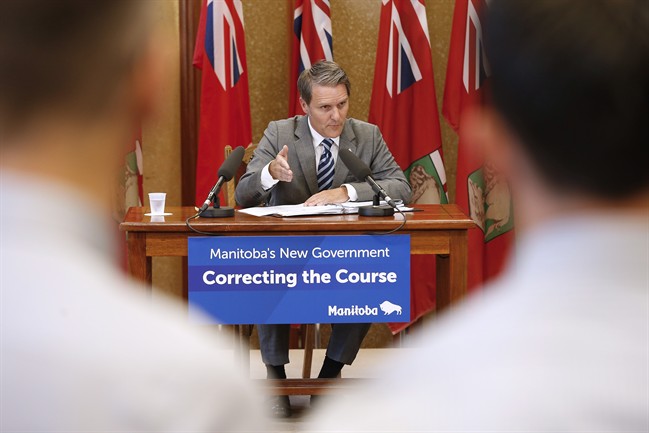 Manitoba’s new Finance Minister Cameron Friesen speaks to media at a press conference before the provincial budget is read at the Manitoba Legislature in Winnipeg, Tuesday, May 31, 2016. (THE CANADIAN PRESS/John Woods)

WINNIPEG – High-income seniors who own homes will no longer get a cheque of up to $470 a year and minimum-wage earners may not get a raise for the first time in recent memory in the first budget tabled by Manitoba’s new Progressive Conservative government.

The $13.5-billion budget, which posts a $911-million deficit, cuts the number of seniors who can take advantage of the education property tax rebate in half by tying it to income.

Seniors earning more than $63,500 won’t get the rebate cheque at all. The changes will net the province about $44 million a year.

“Tax policy must be principled,” Finance Minister Cameron Friesen said Tuesday. “Those seniors who actually need the support will continue to receive it.”

For the first time in 17 years, there was no mention of minimum-wage earners in the budget and no commitment to give them a raise in the fall. Manitoba’s current minimum wage is $11 a hour, which puts it near the middle of the pack among provinces.

Manitoba Premier Brian Pallister said the government is helping low-income earners by increasing personal income tax brackets and tying them to the rate of inflation starting next year.

“What it will do is leave more money in the hands of Manitobans who want that money in their hands,” he said.

Advocates say that change will leave low-income earners about $16 richer annually compared with about $400 they would see from an hourly raise based on inflation. Molly McCracken with the Canadian Centre for Policy Alternatives hailed the changes to the seniors tax rebate, but said the tax changes for low-income earners are “really a drop in the bucket.”

“It’s very disappointing,” she said. “With the cost of food going up, the cost of housing going up, people are going to be paying more on their very limited income.”

The budget makes good on a few key promises made by the Conservatives in the runup to the April election, which saw the NDP swept from office after 17 years. The government plans to start reducing ambulance fees by allocating an extra $22 million for emergency response and transport services.

“Manitobans should never be forced to choose between paying high ambulance fees and receiving the emergency medical attention they need,” said Friesen, who promised to cut the fees in half over four years.

The government is also killing the per-vote subsidy worth about $600,000 a year for political parties. The Tories never collected their share but it will hurt opposition party coffers.

The PCs made tax-cutting a cornerstone of their election campaign and the budget contains no new taxes or tax increases.

The Conservatives, who had refused to say when they would balance the books, are now predicting it will take at least eight years to bring the province back into the black. The goal is practical given people don’t want to see service cuts as the province lowers taxes, Pallister said.

“We want to make sure we strike the right balance.”

This year’s budget includes modest funding increases for most departments, but boosts the Department of Families by 10 per cent, or almost $200 million. That includes about a 4.5 per cent increase for Child and Family Services, which is struggling with a record number of children in care.

“We’re concerned with what’s not in there,” she said.

Still, others see the changes to tax brackets as a good first step.

“They’re showing that they care about taxpayers,” said Todd McKay of the Canadian Taxpayers Federation. “On the down side, we’re not seeing enough spending control yet … You just cannot balance a budget without trimming spending.”

Some of the highlights of the Manitoba budget

The Manitoba government tabled a $13.5 billion budget Tuesday. Here are the highlights:

— A $911-million deficit with a plan to balance the budget in eight years.

— No new taxes or tax increases.

— Personal income taxes will be indexed to inflation starting next year.

— Middle-income senior homeowners get a smaller rebate on education property taxes while high-income seniors lose the rebate entirely, netting the province about $44 million a year.

— The elimination of a per-vote subsidy for political parties.

— A reduction in ambulance fees.

— No mention of minimum wage increase for first time in recent memory.