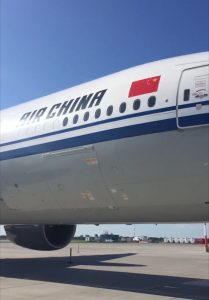 The Boeing 777-300, carrying nearly 300 people, was on its way from Washington, DC to Beijing when it experienced mechanical problems.

The plane was able to land safely at 8:26 p.m. without incident and no one was injured.

All passengers and crew stayed overnight in hotels and were expected to continue their journey by Sunday evening.

Air China is sending another aircraft to Winnipeg while the original plane undergoes repairs.