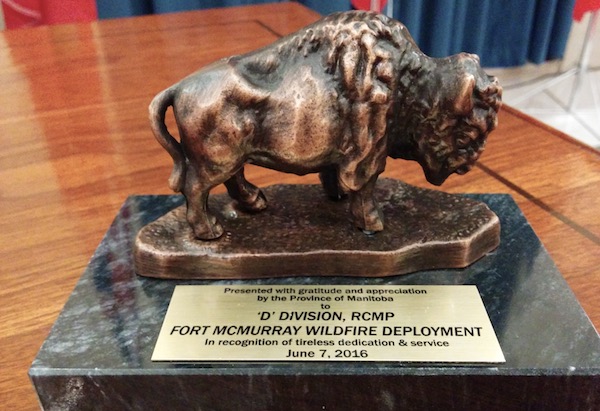 Sixty-five members of the RCMP ‘D’ Division were honoured with the Order of the Buffalo Hunt on Tuesday, June 7, 2016. (CHRISD.CA)

The Manitoba government has honoured 65 members of the RCMP “D” Division for their role in helping with the Fort McMurray wildfire situation earlier this spring.

The Order of the Buffalo Hunt, the province’s highest honour, was bestowed by Premier Brian Pallister during a ceremony Tuesday at the Manitoba legislature.

“These officers displayed exemplary conduct while recently deployed to Fort McMurray, at the height of the terrible wildfires that forced mass evacuations and the destruction of many homes and businesses,” Pallister said.

“Their presence ensured the safe operation of checkpoints, the protection of property and businesses, and facilitated the emergency evacuation of major oil industry camps under threat by the fires.”

Those honoured include members of the RCMP “D” Division Tactical Troop and RCMP uniformed members. Their duties included working out of the Emergency Operations Centre, controlling checkpoints and ensuring the access of critical infrastructure emergency personnel to Fort McMurray, Anzac and Gregoire Lake. Officers also assumed the control of daily detachment duties within the Wood Buffalo/Fort McMurray detachment area including the safekeeping of personal properties, business and infrastructure within Fort McMurray.