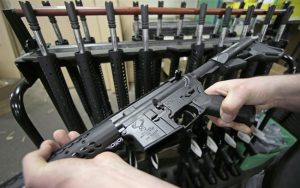 In this April 10, 2013 file photo, a newly- assembled AR-15 rifle is shown at the Stag Arms company in New Britain, Conn. The semi-automatic rifle used in Sunday’s deadly mass shooting in Florida is classified as a restricted weapon in Canada and most people can only use it at a gun range. (THE CANADIAN PRESSS/AP/Charles Krupa)

WINNIPEG — Nearly 1,000 people gathered on the lawn of the Manitoba Legislative Building Monday night in solidarity for a vigil honouring the victims of the senseless mass shooting at an Orlando nightclub Sunday morning.

At least 49 were killed and 53 injured when gunman Omar Mateen, 29, opened fire at Pulse Nightclub in Orlando. He was killed in a shootout with police who used an armoured vehicle to break down a wall into the club.

Members of Winnipeg’s LGBTTQ* community and other supporters gathered for a candlelight vigil, where names of all 49 victims were written on cards and placed on the steps of the legislature.

“While mass shootings against the LGBTTQ* community is rare in North America, it serves as a sobering reminder for the need for advocacy, education and celebration in communities locally and around the world,” said Jeff Myall with Pride Winnipeg.

The organization invited all Manitobans who believe in equality to attend the vigil. A line of people waiting to sign a book of condolences stretched from the front of the legislature to Broadway. The book will be sent to the City of Orlando.

“Following this weekend’s violence, it is our hope that the Florida community remains strong by banding together to create a groundswell for true social change as a follow-up to the ruling on same-sex marriage”

Politicians and dignitaries also spoke at the vigil.

Sobering to see the names of #Orlando shooting victims on the steps of the Manitoba Legislature. #mbpoli #LoveWins pic.twitter.com/BDQXwkhFvs