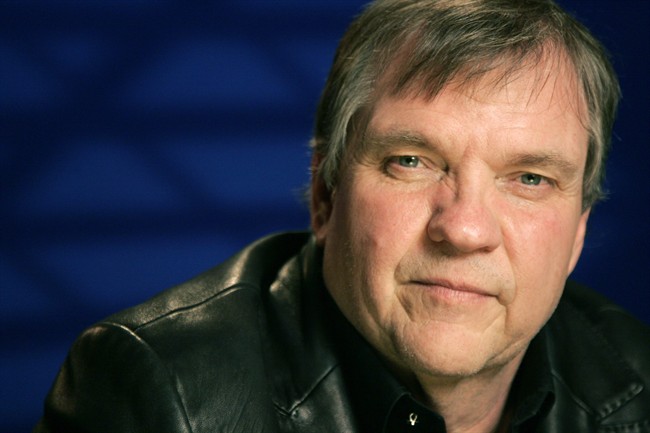 Recording artist Meat Loaf poses for a portrait in New York, Wednesday, May 5, 2010. Singer Meat Loaf collapsed on stage in Edmonton during show on Thursday night. (THE CANADIAN PRESS/AP,Jeff Christensen)

EDMONTON – The singer Meat Loaf has been released from hospital after collapsing near the end of a performance Thursday night in Edmonton.

Westby said Meat Loaf, who is 68, collapsed due to severe dehydration.

A video of the show at the Northern Jubilee Auditorium shows Meat Loaf bending over, then knocking over his microphone stand and falling to the floor.

Audience members said he had been singing his classic “I’d Do Anything for Love (But I Won’t Do That).”

Westby said news on any Meat Loaf concerts that need to be postponed will be announced later.

“(Meat Loaf) extends his heartfelt thanks for everyone’s support and well wishes, and is expecting a speedy and full recovery,” Westby said in the release Friday.

“Thank you for your support and understanding.”

“If Prince and Bowie was sad, I’d be devastated if anything happened to Meatloaf,” one of the first posts read.

Meat Loaf has said he has asthma as well as a medical condition that causes an irregular heartbeat.

Best known for his iconic 1977 album “Bat Out of Hell,” Meat Loaf, whose birth name was Michael Lee Aday, was a pioneer of bombastic, theatrical rock.

He also made a name for himself as an actor — on Broadway and in the movie “The Rocky Horror Picture Show” — and as a reality TV star on Donald Trump’s “The Apprentice.”

Mikey McBryan, 33, an ice pilot from Yellowknife who had taken his mom to the Edmonton show for her 70th birthday, said late Thursday that the singer appeared to be struggling earlier in the performance, forgetting words and missing cues.

Other fans said they, too, noticed he wasn’t in top form. One tweeted: “It was like he pushed through each song.”

“A lot of people thought it was part of the show — this is what’s going on,” said McBryan, who has himself appeared on the reality TV show “Ice Pilots NWT.”

“And then all of a sudden it wasn’t. The lights went on, they brought out a vertical screen that covered everybody, and they said, ‘Can everyone vacate the arena?'”

Meat Loaf has collapsed on stage before. In 2011, medics rushed to his aid during a concert in Pittsburgh, but he got up and finished the show. In 2013, he collapsed at Wembley Arena in London and was admitted to hospital.

According to his website, he is scheduled to perform Saturday in Cold Lake, Alta., then in Lethbridge, Alta., next Tuesday; Penticton, B.C., on Thursday; Victoria on June 25 and in Abbotsford, B.C., on June 28.