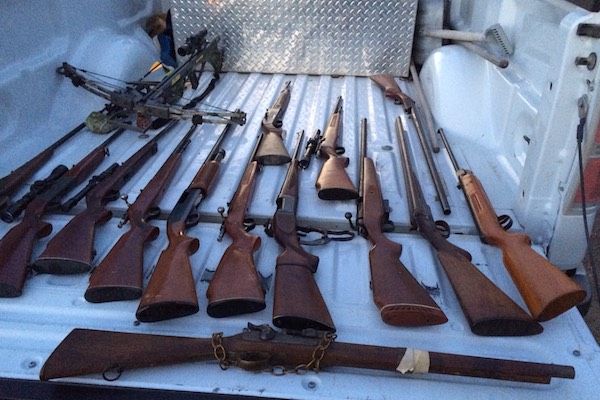 Guns seized in Elma, Manitoba after RCMP executed a search warrant on a home in the community on Sunday, June 19, 2016. (RCMP / HANDOUT)

RCMP deployed all of the resources at their disposal on Sunday morning in Elma, Manitoba to apprehend an armed suspect.

Residents reported that a man returned to a house party with firearms and was acting in a threatening manner at around 3:15 a.m.

Police were called, but the man had left before they arrived. Multiple gunshots were heard in the area and witnesses said the man had a handgun and a semi-automatic rifle.

Officers from neighbouring detachments were brought in to assist in the search, and a RCMP critical incident command post was deployed, along with a tactical armoured vehicle, emergency response team and police dogs.

Police located the man’s truck at a residence north of Elma at approximately 10:15 a.m. He excited the home and was arrested without incident.

Officers executed a search warrant on the man’s home and found 18 firearms, including an AR-15, a 30 round magazine, and a 20 round magazine with 20 rounds loaded.

Trevor Ewanochko, 42, from the RM of Whitemouth has been charged with 33 counts of various weapons and threat-related offences.

← Previous: One in Custody Following Death in Pukatawagan Next: Steinbach Man on Motorcycle Killed in Crash with Semi →
Tags: Crime | Manitoba | RCMP