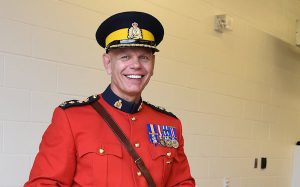 Manitoba’s top commanding RCMP officer will be in attendance on July 9 to march in the Steinbach Pride Parade.

“The Steinbach Pride march is an opportunity for all of us to celebrate the importance of diversity and inclusion,” said Scott Kolody, “D” Division Commanding Officer, in a statement on Monday.

Kolody was announced in his new role hours earlier.

The city’s first-ever parade has been a contentious issue for politicians at all three levels, who have vowed not to attend.

The city southeast of Winnipeg has a population of roughly 14,000 and is often referred to as Manitoba’s bible belt.

RCMP originally denied event organizers a parade permit, saying they would have to march on the sidewalk due to scheduled construction along their planned route.

Kolody said he contacted event organizer Michelle McHale, informing her he would attend and march beside her.

“I have also directed the Manitoba RCMP to provide all required resources to ensure participants can walk in Steinbach knowing they are safe, secure and have the RCMP by their side,” he added.