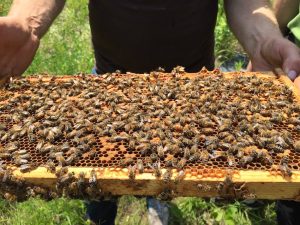 Assiniboine Park Zoo will use its new beehives to bolster the population of the pollinators and educate children on the importance of beekeeping. (CHRISD.CA)

WINNIPEG — The Assiniboine Park Zoo and Beeproject Apiaries are working together to help protect the bee population as it dwindles.

Hives have been placed on the zoo’s property to not only house the bees, but to use their honey as a way of promoting local food production.

Honey harvested from the hives will then be used in the zoo’s restaurants and sold in the gift shop.

Beeproject Apiaries maintains the hives, while also educating zoo staff to incorporate a programming component to relay the importance of bees to children.

Chris Kirouac, co-founder of Beeproject Apiaries, says pesticide use, habitat loss and imported diseases from outside of North American are a few of the main reasons the bee population has been dying off.

“What we’re hoping is to help people do what they can to amend some of those issues, as well as creating habits, such as flowered space,” Kirouac said.

The Forks and The Fairmont Winnipeg are just two more locations in Winnipeg where beehives have recently turned up.