Skateboard Park at The Forks Turns 10 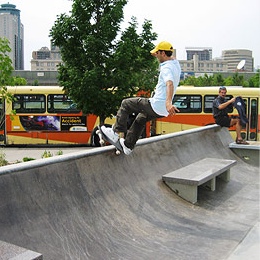 WINNIPEG — It’s been a decade since The Plaza Skateboard Park opened at The Forks.

More than $2 million was donated at the time by the Burns Family Foundation as a gift to the young people of Winnipeg.

“When The Plaza was built, there was nothing like it in the city, or in Canada,” said Paul Jordan, CEO of The Forks.

“We ushered in a new era of showing youth they matter and offered them a place to call their own. Now, 10 years later, we see the results of investing in their lives.”

Over the years, the park has hosted skate camps, BMX competitions and even world-class talent such as Steve Berra, Paul Rodriquez, and Tony Hawk.

To mark 10 years, The Forks will host a skate demonstration tonight from 6-9 p.m. at the park.