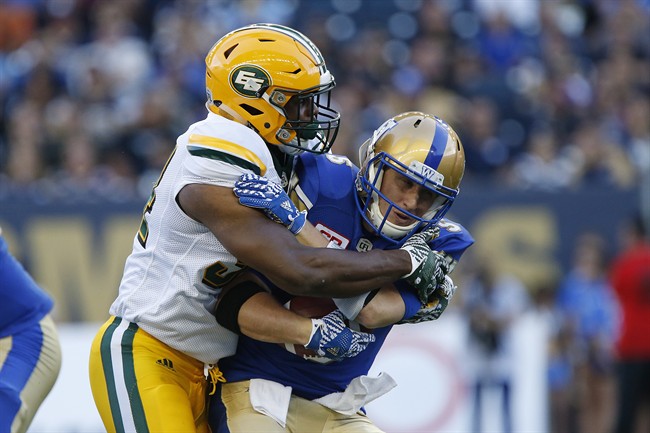 WINNIPEG — As his team has seamlessly shifted from Grey Cup champion to offensive juggernaut, Edmonton Eskimos quarterback Mike Reilly has pulled the strings well. He did so again on Thursday in Winnipeg, throwing for 465 yards to lead Edmonton to a 20-16 win over the 1-3 Blue Bombers.

It is Reilly’s third career game with over 400 yards passing. Two of those have come at the expense of Winnipeg, who have now lost seven straight games against Edmonton.

Reilly succeeded often thanks to two big targets downfield, as Adarius Bowman and Derel Walker made big catch after big catch. Walker had 154 yards receiving, but was overshadowed by Bowman with 185, including a phenomenal 60-yard grab in the second quarter where he soared over two defenders, falling backward to bring it down.

That catch would end in an Edmonton field goal, as most of their first half drives started well but were thwarted by the Bombers defence in the red zone. Winnipeg eventually wilted, though. They held the Eskimos to just 56 yards in a scoreless first quarter, but the total eventually swelled to 517, higher than their season average of 463.

For the Bombers, the story of their home games remain the same. Quarterback Drew Willy was able to put points on the board, but just couldn’t make enough passes to keep his team on the field in the second half. A couple frustrating misses frazzled the 24,000 faithful at Investors Group Field, who still have experienced just seven wins since the building opened in 2013.

“I think there was a stretch where he didn’t set his feet enough, maybe, to deliver the ball,” said Bombers head coach Mike O’Shea. “But no matter what you do at the quarterback position, if you’re always first-and-20, or second-and-11, or second-and-nine virtually the entire game, I don’t know what that’s going to do. That’s a tough spot to be in at the quarterback spot.”

Willy finished with 299 yards on 25-for-38 passing, including a touchdown and two interceptions. The run game was ineffective in trying to offset him, totaling just 48 yards on 13 attempts. A lone bright spot was Weston Dressler, who had one of the better games since joining Winnipeg, finishing with 67 yards on seven receptions.

“A loss is a loss, but you never want to lose at home,” said running back Andrew Harris. “That’s two now for us and that is something but we’ve got a good team here and I have full confidence that we’re going to bounce back and respond in a positive way.”

The game was also slowed by multiple penalties and challenges on both sides. The teams totaled 28 fouls in the first half, which is higher than the CFL season average of 18.8 for a full game.

“Too many penalties to beat a good team, that’s the bottom line,” said O’Shea. “Special teams, we took a bunch of penalties – we’ve been very clean on [special] teams up until this game – and offensively we took a pile of penalties too. So, that’s tough to take. It’s very hard to beat good teams when you’re always either starting deep in your own end or behind the sticks.”

Next week, the Bombers host Edmonton’s in-province rivals, the Calgary Stampeders. That will also be a Thursday night game, starting at 7:30 p.m. They’ll then go on the road to play the Eskimos on July 28.