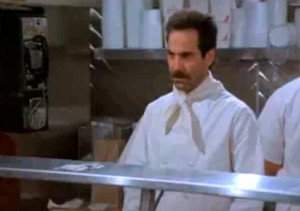 The infamous Soup Nazi from ‘Seinfeld.’

Community groups will vie for the chance to collect a pot of donations to fund their initiatives on Tuesday during the first-ever Winnipeg Soup event.

The Indian and Metis Friendship Centre, 13 Fires, Norwest Community Co-op and Christopher Beavilain will all have four minutes to pitch their small-scale projects to a group of Winnipeggers at the Handsome Daughter tomorrow night.

“We wanted to provide this opportunity for people to become directly involved in shaping their communities by being able to support the projects they believe in, projects they may have not even heard of otherwise,” said event organizer Melissa Hiebert.

Hiebert, a native of Winnipeg who now lives in Vancouver, said the event was sparked after she came across a similar event in that city.

“It’s about opening a dialogue between organizations and the people they seek to reach, as well as creating opportunity for community engagement and a chance for changemakers to promote the great works they are doing in the city.”

Attendees will all contribute a suggested donation of $5 to enter. Everyone will then vote on who they felt delivered the best pitch and support the idea of their choosing. The winning project will receive the entire door take, up to $500.

“We’re really excited to see how many Winnipeggers come out on Tuesday night to be a part of changing this city for the better,” Hiebert added.

← Previous: Man Charged in Death of Shamatawa Woman, 37 Next: Manitobans Can Have Their Say on Province-Wide Pesticide Ban →
Tags: Charity | Winnipeg