Masked Teen Points Gun to Her Head at Portage and Main 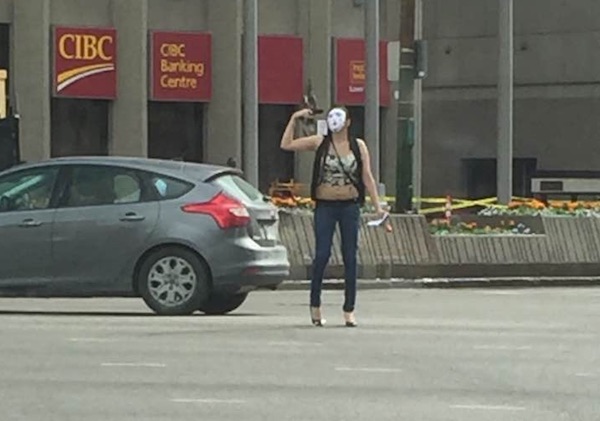 A woman wearing a mask points a gun to her heard at Portage and Main on Tuesday, July 19, 2016. (RZTHEMONK / REDDIT)

WINNIPEG — A 17-year-old girl was tackled to the ground by police Tuesday at the corner of Portage Avenue and Main Street after waving a gun around.

Witnesses say the woman walked into traffic wearing a white mask and pointed the gun towards her head just before 10 a.m.

A video of the incident on Facebook shows the woman lying on the ground prior to standing up and being subdued by officers.

At least eight cruiser cars were on scene and responded “within seconds,” according to witnesses.

Robby Cheslock, who had just stepped off a bus, said police were yelling at the woman to put the gun down or they would shoot.

“I think they shot bean bag bullets to drop her because I heard ‘pop pop,'” she said.

No one was injured in the incident and a replica weapon was recovered from the scene.

The teen faces charges of possessing a weapon for a dangerous purpose, causing a disturance and public mischief.

She remains in custody.