Sketch Released of Man in Connection to Abduction Attempt 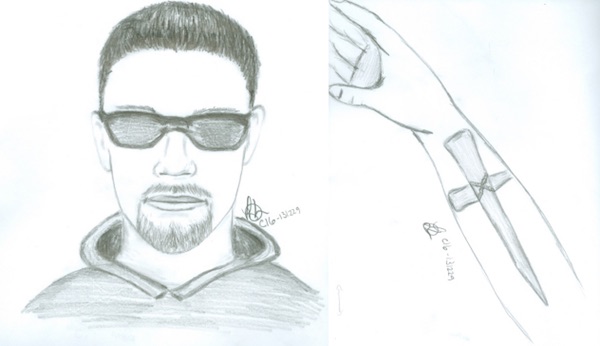 Winnipeg police have released a sketch of a man wanted after an 11-year-old boy was nearly abducted on June 25.

The victim was walking alone in the area of Simpson Avenue and Besant Street when he was approached by an unknown man in a vehicle.

The suspect got out of his vehicle and yelled out, “Get in my car now,” before grabbing the boy’s right wrist. He tried to drag the victim towards his vehicle, but he was able to hit the man and break free.

Police are looking for an aboriginal man approximately 24-years-old, medium build, fair complexion, between 6’3″ and 6’6″ tall, dark medium length hair, dark thin goatee and moustache, stained/yellowing and missing some teeth. He had a tattoo of a cross on his right forearm area described as white and black in colour with a chain design looping through it. He was wearing a black hoodie with some white on the front, black pants with a hole in the left knee, black shoes with white trim around the sole area and sunglasses.

He was driving a new model black van with tinted windows, possibly a Dodge Caravan with rust on the back and red colouring on the rear bumper.