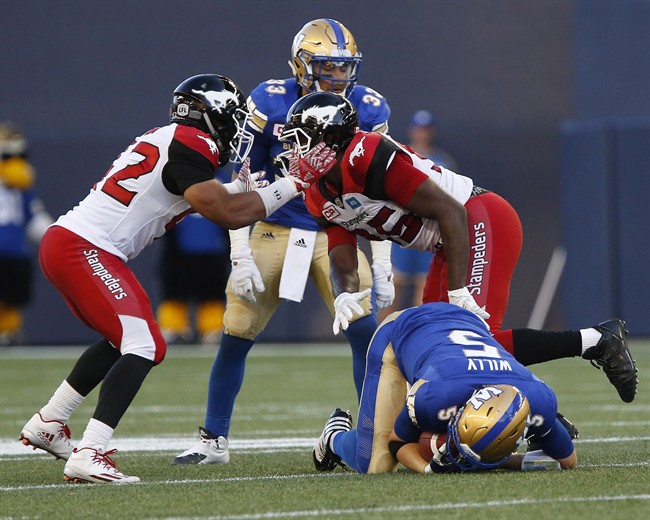 WINNIPEG — The misery continues for the Blue Bombers on their home turf. Faced with the Calgary Stampeders on Thursday night, Winnipeg’s offence failed them once again, as they lost 33-18.

The loss is Winnipeg’s sixth straight at home, a mark that hasn’t been seen by this franchise in 20 years – dating back to the 1996-97 season. As has been the story thus far this season, it was the offence that proved inept, as the team failed to score a touchdown in three and a half quarters with Drew Willy under centre.

The last seven minutes? They were helmed by backup Matt Nichols, who gave his team some life on a scoring drive that cut Calgary’s lead to eight. The Stamps responded with a long scoring drive of their own, though, sinking any hopes of a Bombers comeback.

“Obviously you’d like [coming in] to be under better circumstances. I thought we had some good chances during the game to swing it our way and we need to find a way to make those plays in all phases, do a better job,” said Nichols. “We had opportunities and we need to just make more plays as a team.”

The Winnipeg offence totalled 353 yards, but continued their trend of poor first halves. Running back Andrew Harris had just two yards on five carries in the first 30, while Willy had 12 completions for just 110 yards. Part of their struggles came due to injuries on the offensive line, as Patrick Neufeld and Jermarkus Hardrick both left the game due to injury.

“I’ve been around this [frustration] before, I’ve been 0-5 before and we won a Grey Cup,” said Harris. “I’ve been around the worst of it and fought back and been successful, so I think it can be done. We have the right tools in this room to get it done and we just have to rally around and play our hearts out every day.”

“These guys, they believe we’ve got talent,” said Bombers coach Mike O’Shea. “We’ve got to get going, put something together and get some wins but we’re 1-4. Recent history shows that there’s teams that have started off worse and done very well. These guys understand it just takes one win to start and we’ll get going from there.”

Injuries also plagued the Bombers’ defensive unit, as Macho Harris and Chris Randle both left the game with lower body injuries. Despite the losses, the defensive unit put in a spirited effort in the second half, holding Calgary to 13 points in the half and giving their backup quarterback a comeback opportunity.

“We were pretty beat up,” said Nichols. “I felt like you couldn’t even notice it. We had some guys step up and obviously, every team will take on some injuries and you’ve got to be able to have a next-man-up mentality. We had some guys do a good job of that this week.”

The Stampeders held on, though. Bo Levi Mitchell continued to make his share of big plays, throwing for 310 yards and three touchdowns. Marquay McDaniel led the team in receiving with 80 yards on 7 receptions, while big man Jerome Messam slammed his way for 65 yards on the ground.

Despite those numbers, Calgary often looked dispirited in the second half after gaining a 20-3 halftime lead. Winnipeg capitalized and managed to give their offence opportunities on the field, but the drives mostly ended in field goals and singles.

The real dagger came midway through the fourth, as Willy threw a bullet pick-six interception to Joe Burnett, giving Calgary a 26-10 lead and forcing O’Shea to make a quarterback change.

“When you get down 20-3 to a good team, it’s tough,” said Willy. “We had a little rhythm going there, I hit Darvin [Adams] one-on-one there, we get the field goal there, and we can’t have a turnover on the next series.”

Now 1-4, Winnipeg looks forward to the road next week, when they’ll play Edmonton in another Thursday night game. The Eskimos beat the Bombers 20-16 last week. The Bombers return home to play Hamilton on Wednesday, August 3.