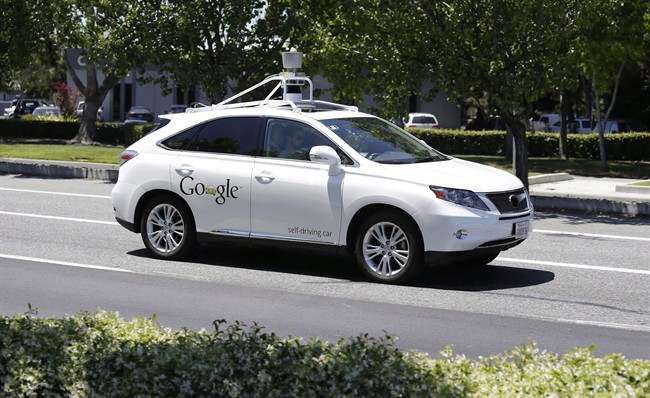 A Google self-driving car goes on a test drive near the Computer History Museum in Mountain View, Calif., on May 13, 2014. (THE CANADIAN PRESS/AP, Eric Risberg)

Self-driving cars have already hit the streets of Winnipeg, but one city councillor wants a broader study for their widespread adoption in the future.

“Self-driving vehicles may sound like the stuff of science fiction, but the truth is is that self-driving cars have already been on Winnipeg streets, car companies are investing heavily in research, and some are expected to be commercially available by 2020,” said Allard.

“This is happening, not tomorrow, today.”

Allard says other major Canadian cities, such as Calgary, Toronto and Vancouver are already studying the issue, considering how policy areas such as transportation, land use, and development planning might be impacted.

The motion will be put forward to a committee on Friday, where Allard will ask for it to be referred to the Executive Policy Committee.

If anyone needs me I’ll just be over here in this self driving #tesla catching up on my readings @nottautocorp pic.twitter.com/kjLF60as9k