Dog Rescued After Shown Tossed in the Air on Social Media 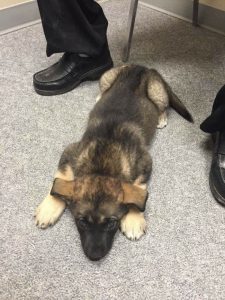 Asha, a puppy in northern Manitoba, has been rescued after being violently thrown in the air. (MANITOBA UNDERDOGS RESCUE / HANDOUT)

WINNIPEG — A dog who was thrown up in the air and violently hit the ground will soon be in the care of an animal rescue organization.

Manitoba Underdogs Rescue located the dog in Easterville, Manitoba after video of the abuse surfaced on Facebook. In the video, a man can be seen tossing the dog in the air and letting it hit the ground. He then walks away as the dog is left paralyzed.

The German shepherd pup’s injuries prompted RCMP in the northern community to contact the organization after becoming aware of the video on Tuesday. The female dog is expected to arrive in Winnipeg later Wednesday and will be looked after by staff at the Dakota Veterinary Hospital.

“We have no idea the extent of her injuries at this point but we had to help her. There is no excuse for any living thing to endure that kind of horror.

The rescue group has named the puppy Asha.

“We’re begging our donors to come forward and donate to her care. We need their help to provide hope to this girl.”

An 18-year-old man from Easterville was arrested Wednesday. He hasn’t been charged, but remains in custody.