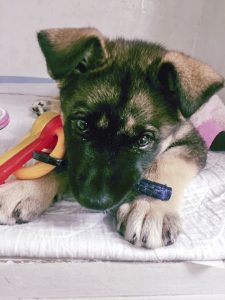 Asha, a puppy in northern Manitoba, has been rescued after being violently thrown in the air. (MANITOBA UNDERDOGS RESCUE / HANDOUT)

A puppy who was carelessly tossed into the air and left injured on the ground this week in northern Manitoba is now able to stand up.

Staff with Manitoba Underdogs Rescue say Asha, the German shepherd they rescued on Wednesday, is now able to wiggle her tail.

“She decided to surprise and delight us all by standing, which means that the damage to her spine is probably minimal,” said spokesperson Lindsay Gillanders.

Asha was rescued by RCMP after video surfaced on Facebook of a man throwing the puppy up into the air and dropping her. She lets out mournful cries as she remains motionless on the ground.

The dog arrived at Pembina Veterinary Hospital early Thursday morning. She was seen and stabilized with fluids and will undergo an X-ray later today.

Gillanders says they believe Asha has a pelvic fracture, and she isn’t putting weight on her front right paw.

“She’s doing well and seems to be loving all of the attention from her new veterinary friends.”

Jesse Young, 18, from Easterville, Manitoba remains in custody and has been charged with causing unnecessary pain and injury to a dog, and breach of undertaking. He will appear in The Pas court on August 2.

Donations for Asha’s continued care can be made through the MUR website.