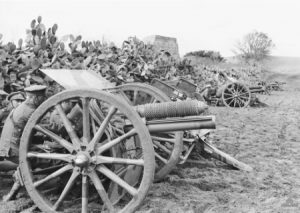 The Royal Canadian Artillery Museum at CFB Shilo has added a rare artillery piece from the First World War.

The museum has acquired a QF 13-pounder gun in its original condition after a donation by Seymour Schulich of Toronto.

Officials say the gun is one of a batch assembled in India from parts shipped from Great Britain.

“Many years ago, this gun was on display in a South African museum. It was eventually bought by a private collector from the UK and was recently purchased by The RCA Museum here in Shilo,” a CFB Shilo spokesperson said.

Schulich made the donation to commemorate the military service of his father, Julius Schulich, who served as a gunner overseas from 1917 to 1919.

The gun will be displayed in the museum’s temporary exhibit, “The Somme: The Mechanization of War.” It will eventually become part of the permanent First World War display.

The RCA Museum is open seven days a week from 10 a.m. to 5 p.m. from Victoria Day to Labour Day in Building N-118, Patricia Road, CFB Shilo.