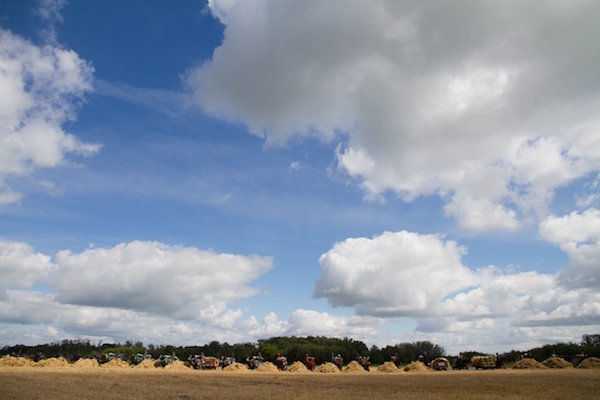 An attempt to set a world record for the most threshing machines harvesting a field together will be carried out on Sunday.

“Harvesting Hope: a World Record to Help the Hungry” will see 600 volunteers from across Canada coming together to harvest a field of wheat with 146 old-fashioned threshing machines from the early 20th century.

The machines have a combined capability of harvesting more than 20,000 bushels of wheat per hour.

“The momentum behind this event is just exploding right now,” said Ayn Wilcox, spokesperson for Harvesting Hope. “We put out a call for people with antique machines to join us in Austin, not knowing what kind of a response to expect, and I think it’s fair to say that we are beside ourselves at the wonderful turnout.”

The equipment will require more than four football fields of space to operate.

The machines will run for at least 20 minutes and thresh 75 acres of wheat.

Funds raised from Harvesting Hope will be split between the Manitoba Agricultural Museum and the Canadian Foodgrains Bank.

The event gets underway at 4 p.m. at the site of the Manitoba Threshermen’s Reunion and Stampede.

Directions: The Manitoba Agricultural Museum’s grounds are near Austin, Manitoba, about 125 kilometres west of Winnipeg. From the junction of the Trans-Canada Highway and PTH 34, travel 3 kilometres south on PTH 34.