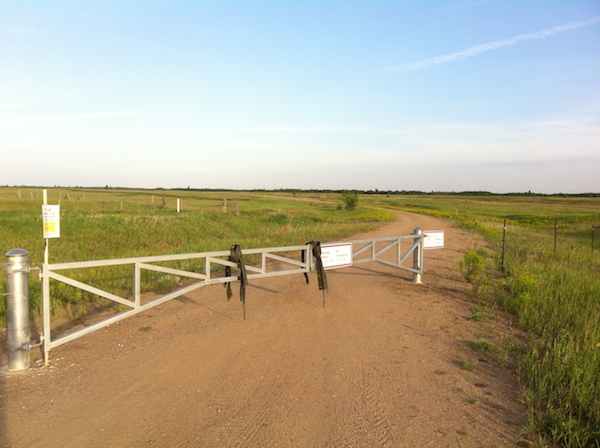 A gate near Camp Hughes on the boundary of the restricted DND area connected to CFB Shilo. (WIKIPEDIA)

NEEPAWA, Man. — On Sunday, I stood in the trenches at the front lines, with smoke and flares and the sounds of gunfire all around. There were loud whistles and the commanders were yelling orders as the troops advanced into No Man’s Land. There was a plane passing back and forth over head.

This unique experience wasn’t a new virtual reality game, it took place under the hot July sun in the middle of a field. It was a battle simulation held at Camp Hughes, located west of Carberry. The re-enactment, featuring members of the Military History Society of Manitoba and ordinary citizens, was part of the festivities to celebrate the camp’s recognition as a place of national historic significance.

The recognition was a long time coming.

Many could be forgiven for not knowing the importance of Camp Hughes. Today, a small pavilion and some interesting topography are all that remain of what was once Manitoba’s second largest city. During the summer of 1916, Camp Hughes was a major military training site, preparing men to head across the ocean, to fight in France and Flanders during World War I.

Over the years, there have been many military bases across Canada, but Camp Hughes is unique for a couple of reasons, the most important of which is its trenches. The training trenches at the site were first built in 1915 and enlarged and improved in 1916. Soldiers who had returned from the Western Front helped design them to accurately simulate the setting that would face the Canadian soldiers once they arrived overseas. In total, the soldiers trained in a 10 km trench system, which included front line, support and communication trenches as well as dugouts.

What also makes Camp Hughes so unique is that all of this remains, albeit a little worn by time and weather. In the 1930s, the Canadian Army moved the camp’s buildings and other moveable assets to Shilo, leaving everything else intact. They basically walked away from the site, leaving everything as it was. Most other army bases in use during World War I continued to be active bases and were updated and modernized as warfare has changed. Today, no army would train its soldiers in trench warfare, but the trenches at Camp Hughes have stayed intact as the area, which sits on Crown Land, has been used to graze cattle since the army left.

Today, Camp Hughes is the only place in North America where World War I era trenches can be seen.

The lessons taught at Camp Hughes played a vital role in the Canadians’ success in the latter part of World War I. The camp also played an important role in our national history and identity. When Canadian troops captured Vimy Ridge in April 1917, many of those men received their training at Camp Hughes. The battle is considered by most to be a defining moment in Canada’s history, it marked the point at which Canada came of age as more that just a British colony and has been celebrated as a symbol of national unity.

It’s been a long road for the Friends of Camp Hughes to achieve this recognition. It began in 1987 when friends Bruce Tascona (who has written a great book about the camp) and Grant Tyler ventured into the area and found some rusted relics and ditches. For 10 years, members of the Military History Society of Manitoba applied for a heritage permit to survey, collect artifacts and make reports on their finding to the province. The research was funded mostly out of the members’ own pockets. In 1993, the camp received Provincial Heritage Site status and was recognized with a “unique and rare” designation. The federal recognition, which includes not only a plaque but also an interpretive exhibit, finally came this year.

Time has passed and no one who actually trained and fought in World War I remains to share their stories. Because of this, historic sites such as Camp Hughes become ever more important. While it’s been a long time coming, I’m glad to see this site has finally been granted national recognition- it’s a site that’s unique not just within our Canadian story, but also within the greater context of world events.