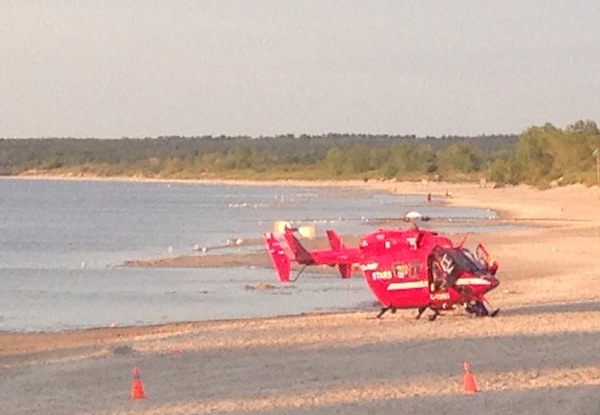 STARS air ambulance responded to a call to the popular summer destination at around 8 p.m.

David Medina, 12, and Jhonalyn Javier, 11, both from Winnipeg, were pulled from the water and attempted to be resuscitated by emergency crews for nearly 30 minutes. However, efforts to save them were unsuccessful.

RCMP say both children were in the water togethering being supervised by the parents of the boy. One of the parents lost track of the children due to the setting sun.

“This was a very public tragedy that unfolded,” said Cam Heke, spokesperson for STARS, noting members of the public were moved away from the water to the beach’s boardwalk.

Wendy Nichol was out for an evening walk at the time and heard that two children were missing. She saw seven lifeguards combing the water in a search pattern.

“All of a sudden, I heard a cry, ‘We found them, we found them’,” Nichol recalled Tuesday.

“They scooped up the young children and brought them to the beach and laid them on the sand and very quickly gave them resuscitation.”

Grant Magnusson, another witness, said lifeguards, police and others cleared the beach and tried to revive the children.

“They were working pretty fast and furious. The firefighters were doing a lot of very heavy chest compressions,” Magnusson said Tuesday.

Police say the tragic incident doesn’t appear to be suspicious and no charges are expected.