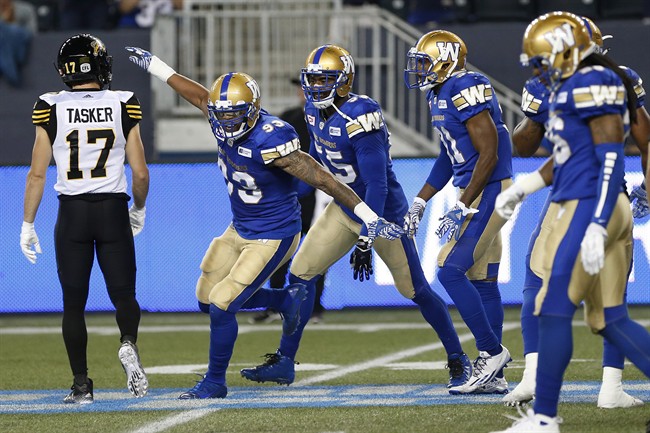 WINNIPEG —  After a brutal 0-3 start to their home schedule, all it took for the Blue Bombers to turn it around was a couple hours of lightning and some explosive play. After a weather delay pushed their start time back over two hours, Winnipeg finally took to the field well after dark, building a big lead over Hamilton on Wednesday night and finishing the job on Thursday morning for a 37-11 win.

The explosive plays came early and often in a 34-point first half, beginning with a pick-six interception by CJ Roberts on Hamilton’s first play from scrimmage. Roberts jumped a poorly thrown out-route by quarterback Jeremiah Masoli, jogging it in to kick things off.

Masoli’s half only got uglier, as he lost a fumble later in the first quarter, then threw a second interception to Taylor Loffler midway through the second. Adding to their quarterback’s mistakes was a Derek Jones punt block in the second quarter, which brought the Tiger-Cats’ turnover total to four in the half. They’d commit six in the game.

Winnipeg’s offence, a laughing stock in their first three home games, made no mistakes in capitalizing on Hamilton’s miscues. In his second start of the season, quarterback Matt Nichols threw an early strike to veteran receiver, and recent Winnipeg returnee, Clarence Denmark to push the Bombers’ lead to 14. Denmark would go for 69 yards on seven receptions in a memorable first game back in a Bombers uniform.

“I had been working out but it’s nothing like being in game shape. It was different,” said Denmark on his return. “I think the guys are more hungry to win now. I’ve only been around a few days but I see the difference in the guys and the atmosphere.”

Nichols then threw a beautiful lob to Thomas Mayo late in the first quarter for his second touchdown toss, giving Winnipeg a 21-point lead. He was impressive yet again for the Bombers, not only settling into his starting role for 246 yards and two touchdowns on 23-for-31 passing, but also seemingly unfazed by the long delay that kept his team in their locker room.

“We kept it light in there, made sure we kept stretching and got each other fired up before we actually went out and played,” said Nichols. “I think it showed the resilience of this team, we weren’t going to let anything affect us, we had a mission tonight and went out and played a great game in all three phases.”

“I know that each time I walked in with an update on the time… they seemed more ready to go,” said Bombers coach Mike O’Shea. “Basically every time I’d step my toe across the line in the dressing room, and I just turned around to leave, they were ready to go. Didn’t matter what the delay was going to be, they seemed ready.”

Two Justin Medlock field goals and an Andrew Harris punch-in sealed Winnipeg’s most impressive half of the season, burying a sleepy Tiger-Cats team 34-0 at the half.

“It was a pretty exciting first half, our guys were pretty pumped. They were into it. I think all three phases did a great job,” said O’Shea.

Hamilton responded with some momentum in the second half, but weren’t able to tally up enough points after an early touchdown drive. Jeff Matthews’ run-in put them on the board, and a field goal made it closer, but it was empty work after a dismal first half. Masoli was their most notable problem, throwing three interceptions in a 26-for-45 night passing.

The win snaps a six-game home losing streak for the Bombers dating back to last season, and pushes them to 3-4 on the year. They may become homesick after this one, though, as their next game at Investors Group Field won’t come until the Banjo Bowl on September 10. In Week 8, they’ll go on the road to take on East Division-leading Toronto.