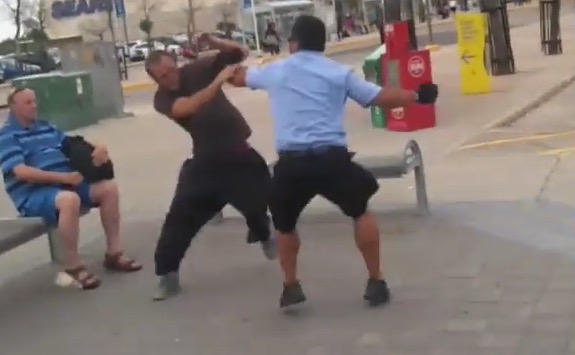 A screengrab from a video showing a Winnipeg Transit and a passenger in a physical altercation on Portage Avenue near Polo Park Shopping Centre on Wednesday, August 3, 2016. (@GUIDEPOSTMEDIA / INSTAGRAM)

A bus passenger has been charged after a physical altercation with a Winnipeg Transit driver outside Polo Park Shopping Centre on Wednesday.

Video of the incident has been circulating on social media after the passenger is seen spitting on the driver, which prompted an instant reaction.

Winnipeg police say the two men had a disagreement over bus fare when the passenger opened the driver’s compartment. The driver opened the bus door to allow for distance between himself and suspect when he was assaulted.

The physical altercation happened at around 4:30 p.m. near the route 21 bus.

A second transit driver and two passengers held the suspect down for police.

Matthieu Joseph Fortier, 29, has been charged with assault and remains in custody.