War Machines of a Different Sort 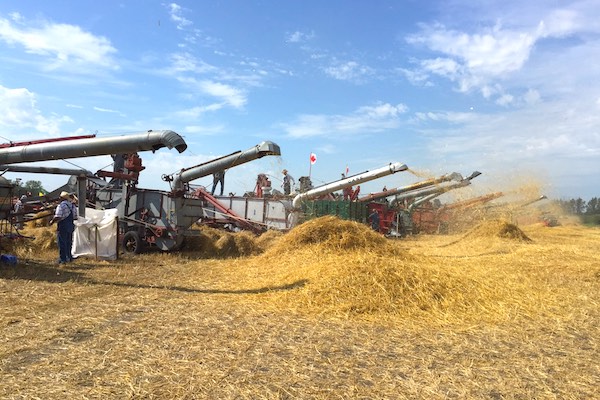 Watching the world record threshing event on July 31 brought a flood of memories and thoughts to mind. I was only 10 years old or less when the neighbour’s threshing machine was retired.

We never owned one and many farmers never did own their own threshing machine. One farmer, or a group of farmers, might have a machine and it would do double duty or more on several farms in a district. Through a small boy’s eyes, these machines were a source of wonder and mystery. They looked huge and for their day, they were big. They were a strange contraption of pulleys, gears, belts, and spouts. When they were hooked up to the gas tractors or steamers by way of the big drive belt, they roared into action, spewing dust, chaff, straw and most importantly, grain. Wonderful bushel after bushel, hundreds a day on a good day to be sacked or hauled to a granary. Sometimes the grain was hauled directly to the grain elevator, but usually everyone was too busy for that. Time enough after harvest to haul the grain to town with a horse drawn sleigh or wagon. In later years, bigger and bigger trucks hauled the grain. Grain elevators were spaced about every 8-10 miles in order to cut down on the tedious miles of hauling grain to the elevator.

The sight of 150 threshing machines, all working at once has never been seen in the history of Canada and may never be seen again. The sight was enough to bring tears to one’s eyes.

Threshing machines have been around for 230 years. Before the threshing machine, various types of threshing was done with relatively primitive machines or by hand. It was a slow, back-breaking process until the big dust belching machine came to the western prairies. The back breaking work was getting the grain to and from the machine.

As complicated as they look, the threshing machine is really pretty simple. A chain driven conveyor takes the sheaves of grain into the machine where a combination of knives and a revolving cylinder beats the grain out of the heads. Sets of sieves move back and forth to separate the chaff and the straw from the grain. The grain is dumped out a shoot or an auger to a waiting wagon or truck.

While one can never say enough about the sacrifice of life, youth and effort of the armed forces, much deserves to be said about the old men, the boys and girls and the women who kept the farms going. Often a grandpa-aged man would be matched with a stripling of a lad to bring in the sheaves. An older man would often run the threshing machine and a mixture of young and old of both sexes would do whatever job had to be done to get the crop in.

Everyone knew that wheat was essential to the war effort. The other grains were important too, but it was upon the wheat, the bread, that the armies marched and the Brits and the rest of Europe survived.

On Sunday, one thing was missing from the successful record attempt, mainly because of safety and the need for efficiency. On a farm, sheaves were usually brought to the machine in horse-drawn racks. There were no horses needed on Sunday because the sheaves were all pre-stacked in rows to be fed into the machines. That was wise as to have had 150 teams of horses amongst all the noise and thousands of people could have been a safety disaster. Horses or no, it was a marvellous sight.

The record may be broken someday, somewhere. The 2016 grain harvest goes to the Food Grains bank, the money will be used to feed many hungry souls. Memories were made for sure.

But the thing that will stick with me is that the threshing machine, while a huge consumer of labour, was a big labour saving device as well. It helped feed the nations and without it, our country might look very different today.

Labour saver, dangerous machine, war machine, call it what you will, the threshing machine shaped our history.

← Previous: Panhandler Struck by Vehicle at Higgins and Main Next: Game On: Athletes Competing at Manitoba Summer Games →
Tags: