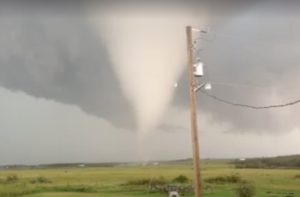 WINNIPEG — Environment Canada is investigating after a tornado touched down in southwestern Manitoba Monday night.

Residents living in Waywayseecappo First Nation say homes were damaged, sending many in the community to seek shelter elsewhere and assess the devastation.

The weather service also said tornadoes also made it to ground near Binscarth, Rossburn and Elphinstone.

“It looks as though one building was destroyed,” said Dan Fulton of Environment Canada. “It tipped over a school bus too.”

The Canadian Red Cross is responding to the community, supplying lodging and food for the evening in Russell, Manitoba.

Waywayseecappo is located about 150 kilometres northwest of Brandon.

Further steps to the response efforts will be determined Tuesday.