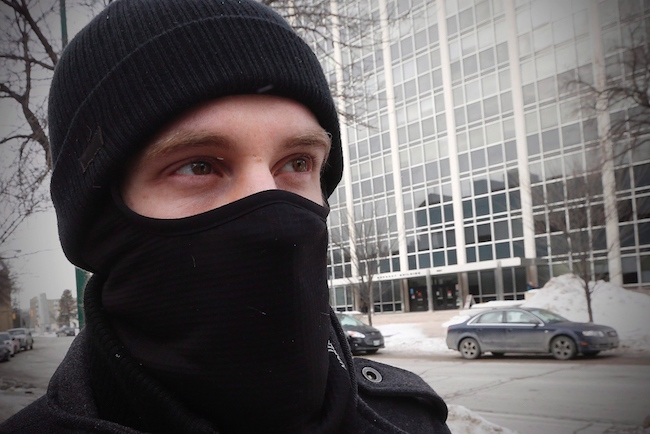 Aaron Driver is seen after a Feb. 2, 2016, court appearance in Winnipeg. (THE CANADIAN PRESS/John Woods) 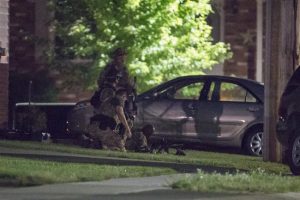 Police keep watch around a house in Strathroy, Ontario, Wednesday, August 10, 2016. A police operation continued well into the evening in the southern Ontario town of Strathroy after the RCMP said it had halted a possible terrorist threat. (THE CANADIAN PRESS/ Geoff Robins)

A Winnipeg terrorism suspect was killed Wednesday after alleging planning to detonate an improvised explosive device in a major Canadian city.

Aaron Driver, 24, was killed in a confrontation with police in Strathroy, Ontario.

RCMP say the suspect “was identified and the proper course of action has been taken to ensure that there is no danger to the public’s safety.”

Driver was handed a series of restrictions by a Winnipeg judge as part of a peace bond in February of this year due to his role as an ISIS sympathizer. He was arrested, but never charged. Police also raided the room he was renting in Charleswood, seizing computers and other equipment.

Some of those restrictions were set to expire August 31, while others were to remain on Driver until December. They included having no access to a computer, social media, a cell phone, or a passport, and checking in regularly with RCMP.

He was also ordered not to associate with any terrorist organization, including the Islamic State of Iraq and the Levant.

The RCMP, the Canadian Security Intelligence Service and other police and security agencies were involved in the operations due to Wednesday’s national security threat.

Further details are expected to be released by RCMP on Thursday.

“We encourage Canadians to remain alert and to immediately report any suspicious or unusual behaviour to their local police or by contacting the National Security Information Network at 1-800-420-5805,” RCMP concluded in their statement.