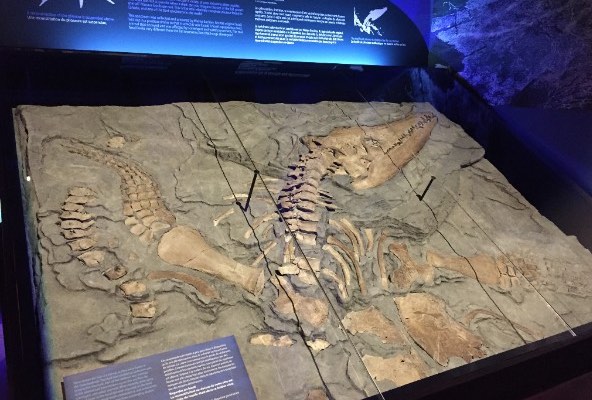 A 90-million-year-old pliosaur fossil is on permanent display at the Manitoba Museum. (HANDOUT)

Staff unveiled the 90-million-year-old pliosaur fossil on Thursday in the Earth History Gallery.

The display is made up of two skeletons, including the original fossil and a full skeletal reconstruction.

“The addition of this world-class pliosaur skeleton is a great way to engage people in the story of Manitoba’s prehistoric past,” said Claudette Leclerc, executive director and CEO of the Manitoba Museum.

Amateur paleontologist Dr. Wayne Buckley discovered the pliosaur fossil in the Manitoba Escarpment in the western part of the province in 2002. Various components were collected from that point until 2005.

Buckley, who is also an agricultural scientist, prepared and documented the fossils in his home workshop before donating them to the Museum in 2014.

Pliosaurs were a type of plesiosaur, a group of extinct reptiles that were at the top of the food chain in the Cretaceous seas.