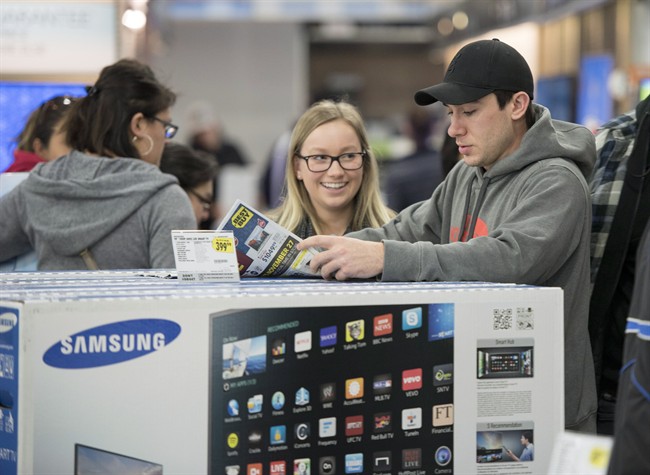 Customers shop at a Best Buy store on Friday, Nov. 27, 2015 in Ottawa. (THE CANADIAN PRESS/Justin Tang)

WINNIPEG — The Pallister government says it is open to extending the hours Manitoba retailers can stay open on Sundays.

It was only in 2012 that the former NDP government changed how early stores could be open on the last day of the week. Stores no longer had to wait until 12 p.m. to begin ringing up items at their registers.

“While we are not considering making changes to the Retail Businesses Holiday Closing Act at this time, we remain open to the input of Manitobans,” said Cliff Cullen, Minister of Growth, Enterprise and Trade, confirmed in a statement.

Cullen said any amendments to the act would seek advice and recommendations from the Labour Management Review Committee.

Currently, stores can only be open between 9 a.m. and 6 p.m. Four years ago, part of the argument in deciding what hours to accommodate, was to have longer hours at the tail end. Critics said having stores stay open beyond 6 p.m. was ideal for those shoppers returning from the lake or elsewhere and needing to get groceries before the start of the workweek.

Two hours south of Winnipeg in Grand Forks, North Dakota, most stores have to wait until 12 p.m. to open, but can operate longer. Super Target, for example, stays open until 11 p.m. on Sundays. Grocery stores and pharmacies can open much earlier.

The Winnipeg Chamber of Commerce says retailers should be able to set their own hours of operatoin.

“Sunday shopping is about choice — choice for retailers to operate according to customer needs, for employees to have more work options and for customers to shop when it best meets their busy schedules,” said Chamber president and CEO Loren Remillard.

“In today’s secular, 24/7 society, why have we arbitrarily decided the retailer sector should be limited when others aren’t? With the majority of provinces already enjoying unrestricted retail hours and competitive pressures from online shopping, Manitoba retailers need government to step forward and support the sector and consumer choice.”

The majority of provinces in Canada allow retailers to set their own Sunday shopping hours. However, Prince Edward Island and Nova Scotia still restrict shopping on Sundays.