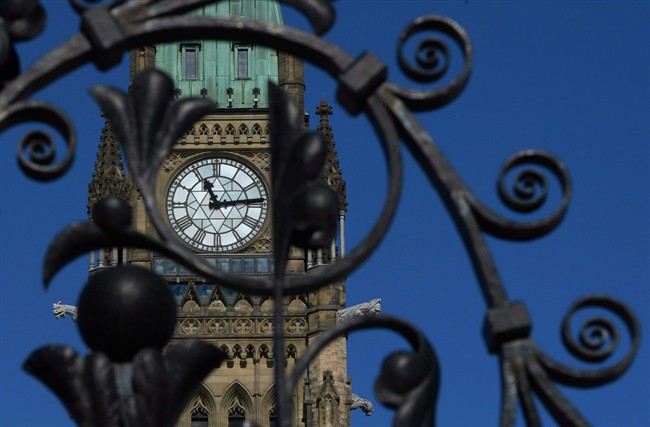 The Peace Tower is seen through the iron gates of Parliament Hill in Ottawa on Thursday, March 19, 2015. (THE CANADIAN PRESS/Sean Kilpatrick)

OTTAWA – The governing Liberals are moving further to reassure Canadians that they have a grip on combating the threat of terrorism in the wake of last week’s death of a man suspected of plotting an attack.

Public Safety Minister Ralph Goodale is to be in Montreal Monday where he was to talk about how the government is moving ahead with a program designed to reach out to those who are vulnerable to radicalization in order to nip in the bud suspected terrorist plots like the one in southern Ontario last week.

Goodale is to visit a Montreal centre devoted to preventing radicalization that leads to violence. Goodale is expected to speak broadly about the program but details aren’t expected until a later date.

Last week, he stressed the importance of identifying those who are open to radicalization and finding the right way to prevent situations such as the death of a man in Strathroy, Ont., who was suspected of planning a terrorist attack.

It also appeared the Liberal government was mindful about questions asked last week about why it was the FBI who detected the alleged terrorist plot that led to the death of Aaron Driver.

Last week, the RCMP fielded media questions about why it was the FBI and not the Mounties who discovered a video that led them Driver, who police said had threatened to detonate an explosive in an urban centre.

Driver died Wednesday night after a confrontation with police that saw a bomb detonated in a taxi cab. It’s not known whether he died from the blast or from a police bullet.

In his statement, Goodale suggested that a free flow of information between Canadian and U.S. intelligence and law enforcement agencies is the norm.

“Consistent with the robust security alliance that we have with the U.S., the Americans passed that material to the RCMP,” said Goodale’s statement, which prominently mentioned the context of the FBI contribution.

“It’s important for Canadians to know that our agencies and their global partners are monitoring potential risks and threats all the time — 24-7, 365 days a year.”

Last week’s incident, as well as the attack on Parliament Hill in 2014, have led to an appetite among Canadians to examine current national security measures and look at how they can be improved to better protect Canadians while safeguarding civil liberties, Goodale said.

Some of that work has already started and will intensify in the fall, he said.