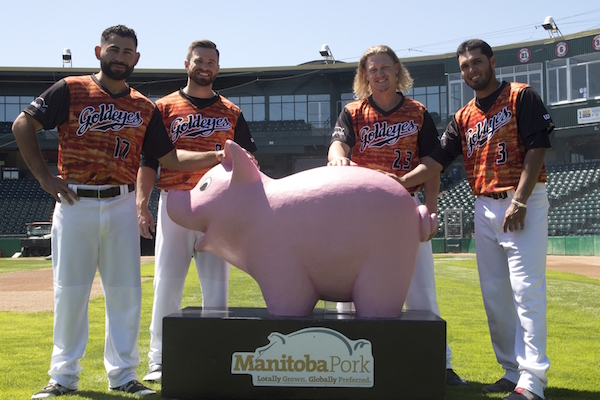 Double the action, double the bacon?

The Winnipeg Goldeyes are heading into a doubleheader Wednesday at Shaw Park. It also happens to be Bacon Night.

The Fish will play two seven-inning games against the visiting St. Paul Saints beginning at 5:30 p.m.

Goldeyes’ players will don special bacon-print jerseys for the games, with festivities getting underway at 4:30 p.m. with a barbeque. Fans can chow down on a pork on a bun with bacon marmalde and a pop for $5.

“Bacon Night was a great success last year, and the Goldeyes’ organization is very excited to continue its partnership with Manitoba Pork in such a fun way,” said Goldeyes’ general manager Andrew Collier. “In a short time, this promotion has become a fan favourite, and we look forward to all of the bacon-themed goodness tomorrow night!”

Tickets are on sale now through Ticketmaster and the Goldeyes box office.