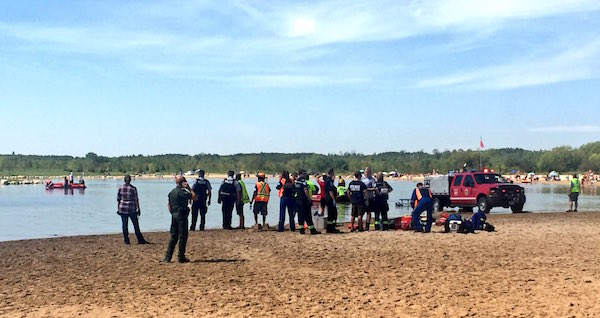 Divers entered the lake at Birds Hill Provincial Park for a “precautionary search” on Wednesday afternoon.

Emergency crews arrived at the beach at around noon. The STARS air ambulance was also called in, along with the Oakbank fire department.

A tweet by the Manitoba government said bubbles were spotted, but no one was reported missing.

The swimming area was completely cleared of beach-goers and a path on the beach was opened to allow for emergency personnel easy access to the water.

Emergency crews searched the area with nets before linking arms and walking in a line.

Officials also canvassed the campground to ensure all campers were accounted for.

Shortly before 4 p.m., the government said a grid search had been completed and RCMP would sweep the lake before concluding the search.

The search was called off at around 6 p.m.