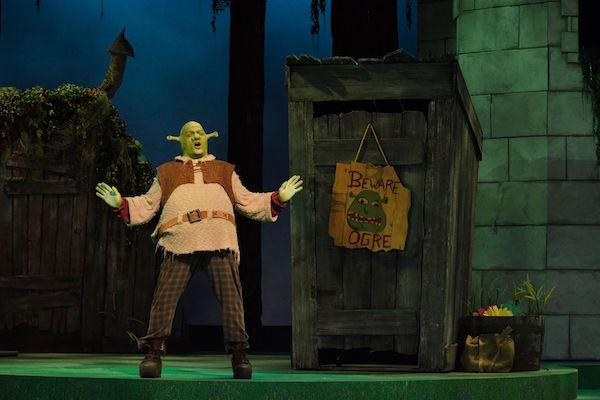 I’ve been going to Rainbow Stage since I was six years old. My first show was “Big — The Musical.” In the last few years, I’ve made a point of trying to catch their entire season. When I heard that they were going to perform Shrek, my first thought was: “That is a big show.”

I’d watched the pro-shot version of the Broadway show on Netflix, and it has got to be one of the largest shows of the last decade. Not only are there plethoras of costume changes, set pieces, cast members, and special effects, but there’s also knowing that you have to fill some of the theatre scene’s biggest shoes — Shrek was originally led by Brian D’Arcy James as the titular character and Sutton Foster as Princess Fiona.

But Tuesday night, I was reminded that nobody does big better than Rainbow. (I’m gonna stop saying that word now.)

I saw “Ring of Fire,” the first show Rainbow produced this year, and although I had a good time, it didn’t fulfill my theatre experience. I watched a group of talented musicians perform Johnny Cash songs, but it wasn’t a show. It felt more like a bio-concert. Rainbow’s done a few of these in the previous five seasons: joining Ring of Fire is also “Buddy — The Buddy Holly Story” and “A Closer Walk with Patsy Cline.” I’m very aware that most of Winnipeg’s theatre season ticket holders are white-haired, but these bio-musicals are something I can experience by myself, listening to a CD and reading Wikipedia.

Shrek, on the other hand, gave me everything I could hope for in a theatre experience: wonderful actors, a moving story, a laugh every now and then, and performances that made me rise to my feet.

Carson Nattrass was an excellent Shrek, mainly because of his impeccable comedic timing, able to ad-lib and feel out the audience’s reactions. If a Shrek doesn’t know how to do this, the show could ultimately fall flat. The point of the show is to be able to make fun of itself, and Nattrass led by example.

Heather McGuigan was a perfect Princess Fiona, never missing a high-pitched note and never letting her male counterpart steal the spotlight when they had a scene together. The two are balanced in such a way that makes you see them as a pair from the moment they share their first scene together.

The only thing that took me out of the story was the microphone problems that seem to plague Rainbow Stage at every show I attend. Sometimes, I chalk it up to being there early in the run (like missing cues when I saw the preview of “Les Mis” last season). But this was the sixth (seventh?) performance of Shrek, and there were still mics too loud and young Shrek’s mic wasn’t turned on at all for his first (and longest) appearance at the beginning of the show. The mixing will always be an issue, thanks to its amphitheatre atmosphere, but it’s no excuse for why cues can’t be followed. It was so noticeable that audience members began chatting about it during the show.

When a movie (or book or other source) is made into a musical, I have to ask myself whether it was necessary to transfer it onto the stage. When Shrek was made fifteen years ago, the creators must have thought that a movie was the best medium for this story. Did it need to be lengthened and transformed into what it is now?

Ultimately, I wasn’t able to answer that question. I remember seeing Shrek in the theatre, but there were children there that night that may have been experiencing that story for the first time. People there who weren’t expecting the Donkey = ass jokes, and who don’t quote “you cut me real deep, Shrek” on a regular basis. Whether it was necessary or not might be irrelevant, because this show works. The magic of the story is perfect on stage, and the production values weren’t dimmed at all from the “Great White Way.” Rainbow Stage is certainly living up to their new mantra, “definitely Broadway, uniquely Winnipeg.”

Shrek the Musical runs at Rainbow Stage in Kildonan Park until August 31. You can get tickets at RainbowStage.ca.