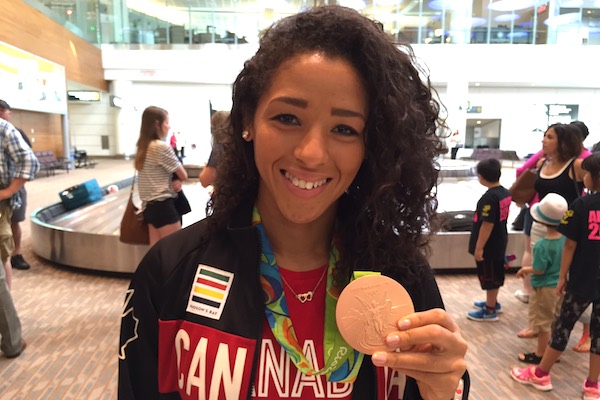 The Canadian women’s soccer bronze medallist returned home to Winnipeg on Tuesday to cheers and hugs from family and friends at the airport.

The 29-year-old midfielder was part of the Canadian squad that defeated Brazil on their home turf to clinch a 2-1 win on August 19 at the Rio Games.

“It feels amazing. Always so happy to come home,” Scott said after coming down the escalator. “And it’s even better coming home with some hardware this time around, so I’m feeling really happy.”

The atmosphere was a little bit more intimate compared to four years ago when Scott won her first bronze at the London 2012 Olympics. But just like in 2012, Scott’s biggest supporters — her mom Charlene and brother Nick — were on hand to welcome her back.

Scott lauded her team and its youthfulness in achieving Olympic success, but said she isn’t thinking about the Tokyo Games yet.

“I’m just thinking about these next seven days here in Winnipeg.”

Scott will take a week off before returning to her National Women’s Soccer League team, FC Kansas City.

“I can’t wait to actually take photos with two (medals) on, it’s going to be pretty sweet,” she said with a laugh.

“Probably the best time of my life”

Justin Duff was another Olympian to touch down in Winnipeg on Tuesday.

The 28-year-old is a middle blocker on the Canadian men’s volleyball team, who placed fifth at the Rio Games. It was the first time in 24 years that Canada was represented in the sport on the world stage.

“It was great. It was probably the best time of my life,” said the former University of Winnipeg player. “I was actually just writing a journal article about it and it changes how you see the Olympics and how you see high-level sport.

Duff praised the federal government’s Own the Podium program in helping the team reach Rio.

Duff will be 32 in 2020, but says that won’t stop him from attempting to reach the Tokyo Games to represent his country.

“I’ll probably have to work a little bit harder, but it’s possible. And that’s what I’ll be trying to do.”