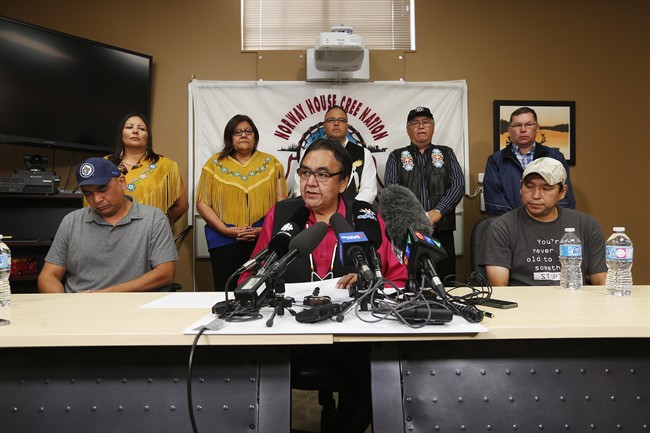 NORWAY HOUSE, Man. – When Ron Evans was 17, he worked as a driver shuttling staff home after their shifts at the Norway House Indian Hospital in northern Manitoba.

He’s now racking his brain trying to think of the names of workers he knew back in 1975, the same year four men were switched at birth at the hospital in the remote community 800 kilometres north of Winnipeg.

“The community, of course, has a lot of questions,” says Evans, who is now chief of the Norway House Cree Nation.

“Was it honest mistakes that were made or was it malicious? That’s what’s going through the minds of many, including mine.”

Two men from Norway House announced last week — and two men from nearby Garden Hill revealed last year — that they had been switched at birth at the federally run hospital in 1975.

The two cases have raised the question of whether there could be more.

Health Canada spokesman Eric Morrissette said Tuesday that the department is offering free DNA tests to anyone born at the Norway House hospital in the mid-1970s.

He couldn’t say if anyone had requested the free tests yet and wasn’t aware of any other cases of babies being switched at birth.

The department has started reviewing the hospital’s historical files, said Morrissette, who added an independent third party will soon be tasked to investigate the mix-ups. The results are to be made public.

Evans said it’s plausible that a switch might happen if babies are born minutes or hours apart, but Tait and Swanson were born three days apart. “How can they make that kind of mistake?”

If one person was at fault, he said, it’s possible he or she may no longer be alive. Evans can recall the names of some nurses from the ’70s, but they have died, he said.

So far, he added, he hasn’t heard of any other people who suspect they were switched at birth and want DNA tests, but that could come later.

He estimates about 200 babies from Norway House are born each year, and the number would have been less in 1975.

The hospital was also a hub for surrounding communities. Residents of about 15 reserves would have had their babies there, said Grand Chief Sheila North Wilson, who represents northern Manitoba First Nations.

Health Canada notified her Monday about the free DNA tests, she said, and she’s been passing on the information to other indigenous leaders. She believes the tests are only being offered for those born in the mid-70s because identification bands were used on babies after that.

She said she asked a health official why they weren’t notifying everyone born at the Norway House hospital in the mid-70s about the testing.

“They said they wouldn’t want to unnecessarily alarm people in doing that, so they’re just going to wait for people to come forward.”

She hasn’t heard of others who believe they were switched, but said there have been rumours for years that it was happening.

“It wasn’t taken seriously because it was just so unbelievable. But I think now people will start to remember those stories and see if there’s any truth to them.”