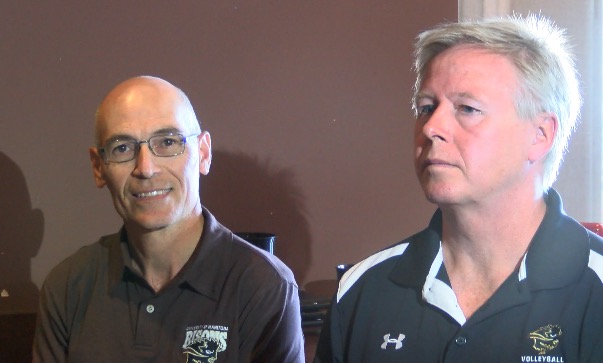 Jon Hykawy (left) will take over for Ken Bentley as head coach of the Manitoba Bison women’s volleyball team for the 2016-17 season. (CHRISD.CA)

WINNIPEG — A new head coach will be at the helm of the Manitoba Bison women’s volleyball squad this season.

Jon Hykawy will step in and lead the 2016-17 team as head coach Ken Bentley embarks on a six-month research/study leave to take on professional development opportunities.

“I’m really excited about this opportunity and to put my 35 years of coaching experience into this once-in-a lifetime experience with the Bisons,” Hykawy said.

The 51-year-old said the Bisons will have a young and athletic team and will have a couple months to get them ready for conference regular season play.

Hykawy has been an assistant coach with both the men’s and women’s programs at the University of Manitoba, being part of winning National Championships in 1990 with the men’s team and in 1991 with the women’s team. He also spent two years as the Head Coach at the University of Regina for their men’s volleyball program (1991-93). In addition, Hykawy spent seven years (1992-99) with the Canadian National women’s volleyball team with both the senior and junior programs.

He also continues to coach his local club program, the Cobra Volleyball Club.

Mike Maidment, 49, has been named associate head coach and Sydney Purvis, 24, joins the Bisons as an assistant coach.