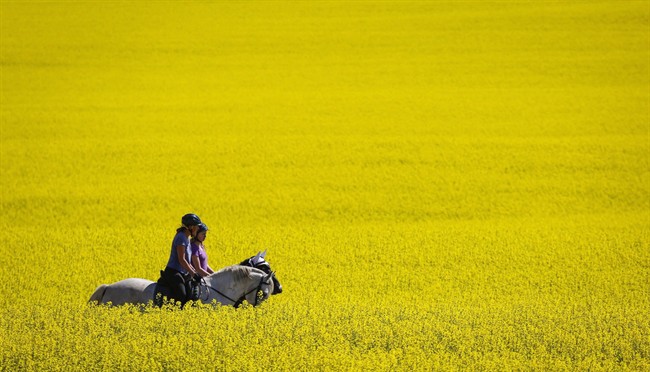 Riders and their horses pass through a canola field as they take an afternoon trail ride near Cremona, Alta., on July 19, 2016. The head of a national group that represents canola farmers says they’re concerned that China’s plan to impose stricter import regulations on the crop this week will put them at a competitive disadvantage and clog Canada’s grain terminals. (THE CANADIAN PRESS/Jeff McIntosh)

Most Canadians don’t know much about canola, except some of us who are older and wiser remember that it used to be called rapeseed. Canola oil is regarded as the world’s healthiest vegetable oil, and those yellow fields that we drive by on the prairies contain one of Canada’s most valuable exports.

With a population of one and a half billion, China is a major market. Decades ago it was wheat that was king, but now it’s canola.

When Prime Minister Justin Trudeau’s father, Pierre, normalized relations with China 45 years ago, who could have imagined that canola would one day be a major issue in that trading relationship. Recently, the Chinese have been complaining that canola from Manitoba and Saskatchewan contains too much dockage, which is weeds and tiny bits of other crops. They were threatening to turn shipments away from Chinese ports, but a solution was found just in the nick of time. We have two years to clean up our act, but I couldn’t help thinking, is this not a classic case of the proverbial pot calling the kettle black?

It was barely a decade ago that North America was suddenly flooded with all kinds of exports from China. Some items had a hard time passing the smell and taste test.

Remember the wonderfully cheap toothpaste that reminded us a little of antifreeze? It turned out one of the ingredients was ethylene glycol, which does indeed help to keep our cars from freezing in January. How about formaldehyde, which is important in preserving our loved ones at least until after the funeral? It was turning up in a number of goodies from China, including cookies… yuck!

Sales of these goods fell precipitously. Who was responsible for such blows to China’s export trade which had turned their economy into an oriental tiger? It did not take long to point the finger at individuals, and justice was swift and rather harsh. After a much shorter trial than a Canadian might expect, a number of the accused in such cases were convicted and executed in short order.