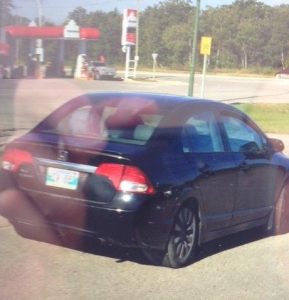 An armed robbery suspect in Lockport, Manitoba made off in this stolen Honda Civic on Wednesday, September 7, 2016. (RCMP HANDOUT)

RCMP are on the lookout for an armed robbery suspect after he held up a store in Lockport, Manitoba Wednesday morning.

The suspect wielded a knife when he entered the store at around 9:30 a.m. RCMP say he was wearing a black hoodie and black pants and made off with an undisclosed amount of cash and merchandise.

He fled in a stolen black Honda Civic from Winnipeg with licence plate HCV 881. Police believe he headed southbound on Highway 9.