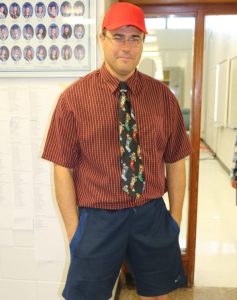 Michael Slobodian, 45, was a teacher at St. Norbert Collegiate. He was struck and killed while riding his bike in south Winnipeg on Wednesday, September 7, 2016. (TWITTER)

Tributes are pouring in for a cyclist killed Wednesday while riding his bike in south Winnipeg.

Michael Slobodian, 45, was a teacher at St. Norbert Collegiate. He was hit by a dump truck at around 8:10 a.m. near the Perimeter Highway and St. Anne’s Road, later succumbing to his injuries in hospital.

The school sent a letter home with students on Wednesday.

“I regret to inform you that long-time teacher and dear friend to our community Michael Slobodian died earlier today,” said principal Chris Szun.

“Michael had been a teacher at CSNC for over 20 years and his passing will be a very difficult and emotional ordeal for staff and students.”

Szun said several school and divisional supports will be available for students and staff who may require assistance.

Flowers have been placed at the roadside where the collision occurred. Staff, students and friends have been sharing memories of Slobodian, or “Slobo” as he was affectionately known, on social media.

Winnipeg police say Slobodian was riding his bike westbound on the Perimeter approaching St. Anne’s Road. A Mack truck was also travelling west and came to a stop at a red light. When the light turned green, the truck made a right turn and struck Slobodian.

The area surrounding the crash was closed to traffic until around 2 p.m.

Charges against the driver will be considered once the investigation is complete.

Police are asking anyone who witnessed the crash to contact investigators at (204) 986-6271.