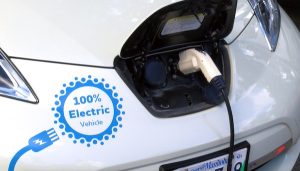 The Manitoba Electric Vehicle Association (MEVA) showed off its rides at the Manitoba legislature on Saturday, September 10, 2016. (CHRISD.CA)

WINNIPEG — It’s a tight-knit vehicle community, but with more drivers joining the ‘green’ side (no, we’re not talking about becoming a Roughriders fan), the number of electric vehicles on city roads is growing.

You don’t have to tell Robert Elms that, he can see first-hand. The president of the Manitoba Electric Vehicle Association (MEVA) is a firm believer in saving money at the gas pump.

“Just to the individual that buys the car, the electricity these vehicles use is so little… you would be saving thousands of dollars every year on your gasoline bill,” Elms said on Saturday.

MEVA was holding a demonstration and car show at the Manitoba legislature as part of ManyFest. About two dozen electric vehicles, including a pontoon boat, were on display. A pair of Teslas, a i-MiEV, Nissan Leaf and new technology from Ford, were some of the vehicles turning heads.

Elms says the driving range per vehicle’s make and model varies, depending on how much you’re looking to spend.

“The Nissan Leaf has a range of around 150-160 km (on a single charge). If you get into the Teslas, you can have a range of somewhere over 300 km or over 450 km. It depends on the kind of driving you’re doing as to which vehicle you’re going to want to choose.”

Choosing an electric vehicle for that long-haul summer family road trip may be out of the question for now, as Manitoba only has one Level 3 (30kW DC) charging station available in Winnipeg at Red River College’s Notre Dame campus. Tesla will add its own quick-charging station in Winnipeg by the end of this year, but it will only be compatible with Tesla models. Elms says the vehicle manufacturer’s charging network can take you across the United States, essentially allowing you to drive for free if travelling south of the border.

Ford is also showing off two of its new environmentally-friendly rides this weekend. The all-electric Ford Focus and C-MAX Energy Plug-in Hybrid.

Spokesperson Adam Dooley says the C-Max has a total electric and hybrid range of about 1,000 km.

“It starts off as a fully electric vehicle for about 40 km, and then it converts into a regular hybrid gas engine like you’re used to. It will sip gas forever and ever.”

The C-Max will run you about $33,000 after $3,000 in employee/promotional discounts. The benefits over time, as with any electric or hybrid ride, are savings at the fuel pump.

Ford recently announced it’s investing $4.5 billion in its electric vehicle fleet by 2020. The 2017 Focus will have a range of more than 150 km and can be charged to 80 percent of its capacity in 30 minutes.

Elms estimates the average driver will make up for the additional cost of the upfront purchase of an electric vehicle in two to four years.

“The rest of the time you own the vehicle, it’s all gravy.”