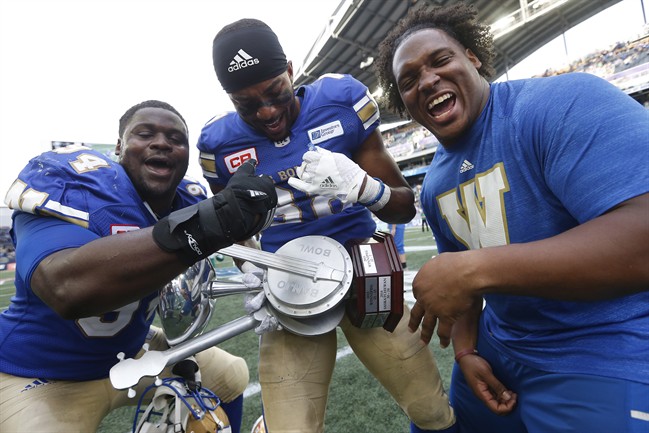 WINNIPEG — One week after squeaking out a win in the Labour Day Classic, the Winnipeg Blue Bombers returned home and delivered another nail-biting win over the Saskatchewan Roughriders. Their 17-10 victory came thanks to a key takeaway, followed by an excellent drive anchored by quarterback Matt Nichols.

Following a third quarter where the Bombers were thoroughly roundhoused by the Riders — tallying just 38 yards of offence and giving up an 8-play, 72-yard touchdown drive — the game was tied 10-10 and the Bombers were yielding another red zone drive to Saskatchewan.

That’s when Kevin Fogg came up with the game’s pivotal turnover: ripping the ball from Riders receiver Caleb Holley’s arms. Fellow defensive back Johnny Adams recovered the turnover, the only one for either team, and set up the Bombers offence. A six-play, 94-yard march followed, ending in Nichols’ second running score of the game, to put Winnipeg ahead for good.

“We needed that. I’m glad that that play happened, because that was a huge momentum shift for us,” said Fogg.

“It absolutely was the turning point,” said Nichols. “It was kind of a stalemate for a long time in the game for both sides, kind of waiting for something to happen almost, and finally our defence made a great play.”

The win is the Bombers’ sixth straight, happening in front of 33,234 at Investors Group Field, as they move to 7-4 on the season.

“It’s extremely nice to reward the fans for their patience, their perseverance,” said Bombers coach Mike O’Shea. “They stick with us, it seems like. They’re loud and, shoot, they’re obnoxious to the opposition, which is fantastic. We couldn’t ask for anything more.”

With injuries to Andrew Harris and Ryan Smith, O’Shea’s quarterback held the ship steady for Winnipeg’s offence. Besides running it in twice, Nichols threw for 247 yards, 135 of those to Weston Dressler. Winnipeg’s offence also benefited from numerous Rider penalties, which helped offset the injury bug.

“The coaches do an unbelievable job making sure these guys are prepared and players themselves, right from the first day of training camp, understanding their roles,” said O’Shea. Linebacker Tony Burnett was one of those who came in prepared, subbing for the injured Ian Wild.

Those penalties hurt Saskatchewan most in the end. Quarterback Darian Durant was solid with 283 yards, but only engineered one touchdown drive, his defence unable to help him with any takeaways of their own.

There was a glimmer of hope late — or fear, if you were wearing blue. A potentially game-sealing field goal attempt by Justin Medlock went wide (he missed two of his three tries), and a 60-yard return very nearly gave the Riders a repeat of last week’s theatrics. It was, however, called back by a penalty – an appropriate end for the now 1-10 Riders.

After over a month away from home, the Bombers stick around for at least another week – they’ll take on Toronto at 1 p.m. next Saturday. They beat the Argonauts 34-17 in Week 8 at BMO Field.