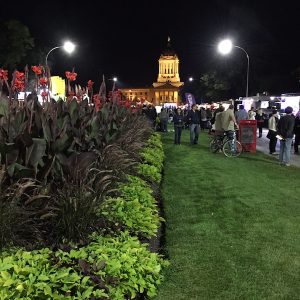 WINNIPEG — An estimated 70,000 people made their way down to Broadway last weekend to take in the sixth annual ManyFest.

The Downtown Winnipeg BIZ hosted a celebration of community, arts, entertainment, and healthy living from September 9-11.

“There’s no doubt in my mind that downtown was the place to be this past weekend,” said Stefano Grande, CEO for the Downtown Winnipeg BIZ

“It’s amazing to see thousands of Winnipeggers coming together from all across the city to celebrate our downtown and create an exciting energy and vibe in the heart of our city.”

Food Truck Wars were just one of many highlights attendees were treated to, where the best of the best on wheels duked it out for supremacy.

Judges crowned The Red Ember’s Carrot Pizza as most original, KYU Grill’s Big Wave as best presentation, and Simba Safari Grill’s Chapati Burger as the best bang for your buck.

ChrisD.ca was proud to be an official media sponsor for this year’s event.