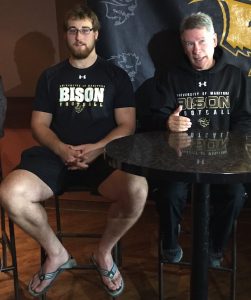 The 21-year-old is the seventh-ranked CIS football player to make the list.

“Geoff has continued to work hard to be one of the top offensive lineman players not only in Canada West but the CIS,” Dobie said. “He continues to be a leader on and off the field and has been a constant on the Bison O-line over the past few years.”

Gray said it doesn’t come as a huge surprise to be on the list.

“Going to East-West (Bowl), it’s a pretty good indicator of where you stand and I was pleased with how I played there. It’s a start though… I’m going to keep on working to get better.”

The 6’6, 310 lbs. ‘O’ lineman is also an Olympic powerlifter in local and western Canadian competitions. Gray placed fourth in his weight class two years ago while competing at nationals.

In 2015, the top-ranked CIS player on the initial scouting bureau list was Bison David Onyemata. The Nigerian native finished as the top prospect in the final list on April 2016 and was drafted by the NFL’s New Orleans Saints and CFL’s Saskatchewan Roughriders.