Gravel Truck and Train Collide at Controlled Crossing in Manitoba 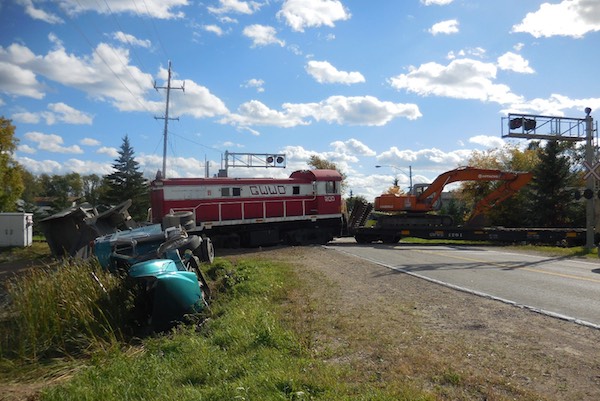 The scene were a truck collided with a locomotive near near Hadashville, Manitoba on Monday, September 19, 2016. (RCMP / TWITTER)

HADASHVILLE, Man. — A train has derailed near Hadashville, Man., after colliding with a gravel truck.

The crash took place at a controlled crossing about 100 kilometres east of Winnipeg on Monday.

The driver of the gravel truck and two train operators were taken to hospital with minor injuries but were treated and released.

The train is owned by the City of Winnipeg’s water and waste department, and did not spill any fuel and was not carrying dangerous material.

Tom Nixon, fire chief in the Rural Municipality of Reynolds, said the driver of the truck was a member of his volunteer fire department.

Nixon said he has driven the same road at the same time of day and had similar trouble trying to see the crossing.

“The sun is setting down and he said he had a hard time seeing, and then he heard the whistle and tried to veer off to the right to miss the lights,” said the chief.

“When he missed the lights, the train hit his box of the gravel truck.

“I’m more than glad he’s OK. You can replace this stuff, but you can’t replace him.”

Crews are expected to use a crane to remove the train by morning.

The driver of the truck has been charged with failing to stop at a railway crossing.