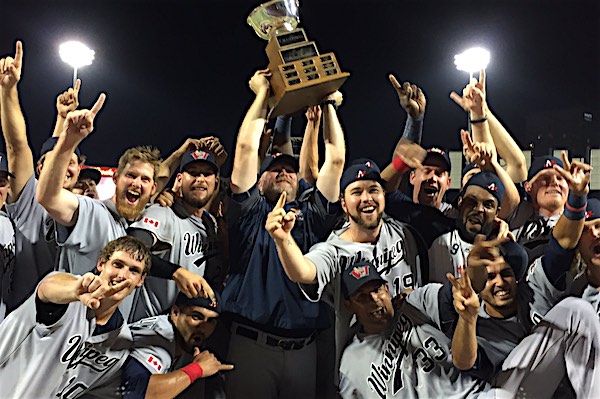 The Winnipeg Goldeyes celebrate their third championship in team history after defeating the Wichita Wingnuts 11-4 on Monday, September 19, 2016. (@WPG_GOLDEYES / TWITTER)

The Winnipeg Goldeyes are champions for the third time in the club’s history.

Winnipeg won their second American Association championship on Monday night by downing the Wichita Wingnuts 11-4 at Lawrence-Dumont Stadium. The Fish were also league champs back in 1994 before joining the AA.

The Goldeyes won Game 5 of the championship series in front of 1,013 fans, including many Winnipeggers who made the drive south.

“This is one hell of a team,” Abercrombie said after the game. “I can’t ask for a better team. These guys don’t ever give up. Everybody on the bench to everybody in the game — these guys never gave up. Today, we showed it. These boys deserve this thing. They deserve everything they can get right now.”

Goldeyes’ manager Rick Forney said the team never panicked, even when facing elimination four times prior in the post-season.

“I couldn’t be more proud,” he said. “It’s hard for me to say this, but this is my favourite Goldeyes team of all time, just because of the adversity they overcame.”

The Goldeyes will celebrate their win with Winnipeg fans on Wednesday at 6 p.m. at Shaw Park. Gates open at 5 p.m. Celebrations will include player introductions, highlights, presentations of the championship trophy and banner and a chance to mix and mingle with players. Ballpark food and beverages will be available for purchase at the free event.