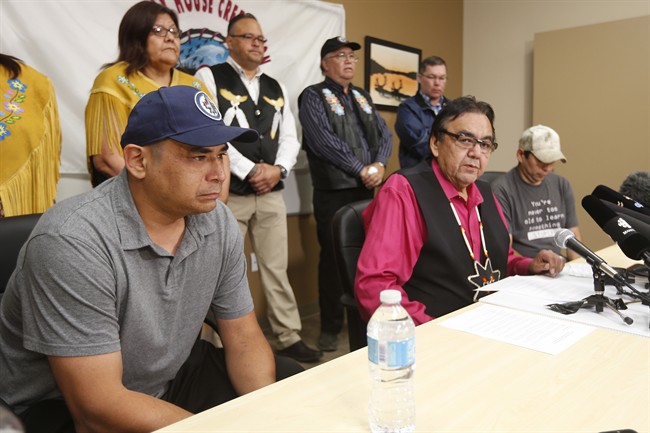 NORWAY HOUSE, Man. – A second set of DNA tests have confirmed that two men were switched at birth at a hospital in northern Manitoba in 1975.

He says the tests show Leon Swanson is the biological son of the woman who raised David Tait Jr.

The 41-year-old men announced at a news conference last month that tests had revealed Tait is the son of the woman who raised Swanson.

Robinson says the latest results were anticipated but needed for Swanson to move on.

It’s the second case of a mix-up at the federally run Norway House Indian Hospital in the same year, and the government has tasked an independent third party to investigate what went wrong.

Tests last November showed Luke Monias and Norman Barkman of nearby Garden Hill also went home from the Norway House hospital with each other’s families in 1975.

Robinson, who has acted as a spokesman for the four men since they learned of the mix-ups, says he sent federal Health Minister Jane Philpott a letter two weeks ago requesting she sit down with the men and their families to discuss the anguish they’ve been through.

“She hasn’t responded to my correspondence whatsoever,” said Robinson.

“I know she’s got lots of responsibilities but this is equally important.”

He said other officials have tried to contact the men but they only want to talk to Philpott.

“They want to deal with the person ultimately responsible for the Indian hospital,” Robinson said.

The two cases have raised the question of whether other babies could have been switched at birth at the hospital.

Shortly after Swanson and Tait held their news conference, Health Canada announced that it is offering free DNA tests to anyone born at the Norway House hospital before 1980, when the facility started fitting newborns with identification bands.

A spokesman said that due to privacy reasons, he can’t reveal if anyone has requested the tests.